On Wednesday March 13th you can find a great reason to really make the decision to stop smoking. If you have been thinking about giving up smoking then why not do it now?

This year the theme for no smoking day is "Swap Fags for Swag": its all about what smokers will gain when they quit - as well as improved health, they'll have extra cash to spend on whatever they like!

Many people think about what they will be giving up and think that they will lose something that they love. Of course, even more don't love the cigarettes anyway. I have lost count of the number of smokers who come and see me, and when I ask whether they enjoy smoking they say ..."not any more"!

By giving up smoking you can find that as well as all of the increases in your health and well being your purse or wallet can start to bulge a little too!

I once wrote a blog for smokers only, which explained how you could get an iPad by giving up the cigarettes !  I was very pleased when I had an email from a smoker in Scotland who had read the blog and decided that it was just the kick that she needed. I don't always have to hypnotise people to stop because sometimes just a few words can help to change the way that you think about cigarettes. 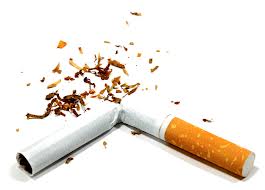 Often when I speak to smokers I explain to them...

"You only have to deal with three or four cigarettes."

Often they respond by saying. "I smoke lots more than that though!"

That may well be true, but I've found talking to many smokers that even if you smoke 60 a day, you may have noticed that there are only three or four that you really enjoy. Many will be unfinished and not enjoyed anyway.

Perhaps it’s the first one of the day, or the one after lunch or after a big meal? Maybe you have a personal favorite.

All the others just ‘slip under the radar’, It's just that habit you have as they cheat their way in without even thinking about them – one in the car or after a coffee break.

Once you deal with the main cigarettes and start to realise that you don't need those, then, like a house of cards, the whole smoking habit will collapse easily.

There is a lot more information on my website here helping you to quit smoking now, and if you want to speak to me to arrange an appointment then you can call 07980 233160 or email me HERE.