Paul Mckenna appeared on the Jeremy Vine Show on BBC Radio 2 as part of the “What makes us Human” series to talk about his new book “Get Control of Sugar” and to talk about his life and work as well as Hypnosis and Hypnotherapy, NLP, Havening and the other techniques that he has championed. 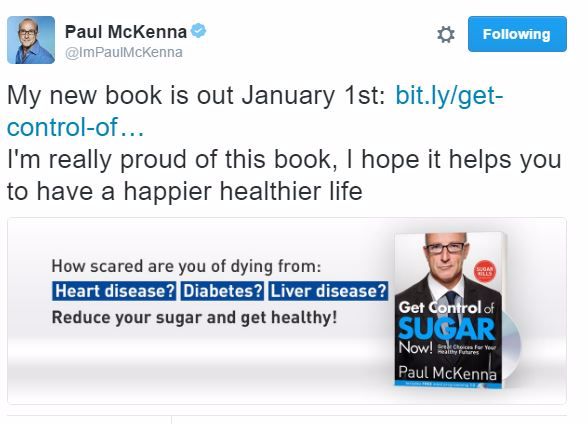 Sitting in for Jeremy was Presenter Amol Rajan, and Paul spoke all about what he does to help people and the breakthroughs in treatment for PTSD with Psychosensory therapy that he has spent much time working with.

Introduced as a self help guru and one of the UKs best selling authors Paul began with his audio essay...

"I have been in the trenches for 30 years as a psychotherapist, working with people who are severly challenged, but also helping a lot of hugh acheivers as well. This is what I have learned about being human...

We all have certain qualities that make us human. On a purely biological level, humans are electrical impulses and chemicals. We are an amazing eco system of thoughts choices and actions, which build themselves into a life that we live. We are a set of multisensory experiences of successive moments of now."

However, there are some things about our humanity that we all know but can’t prove. So, if you ask a neuro-scientist and a poet what love is, although both may be correct in what they say, you will get two very different answers. Well all know what love feels like, but you can’t put it under a microscope.

I like the Buddhist philosophy, the Buddha was not a god he was a man who perfected himself. I am drawn to anything that involves human evolution and perfection.

My job essentially is to give people hope and help people to change. Sometimes, it is to help change behaviour, I do my best to help people to become better versions of themselves. To be more authentic, and I believe that authenticity is at the very heart of being human.

However, that doesn’t mean that we all have to be perfect. I think that perfectionism is something that can work for us, or against us. I would say that very often some of the biggest learning experiences I have had, or noticed other people have had, have been when they have made mistakes. Those have been important learning experiences. Often it is our imperfections that give us our humanity. "

Paul went on the explain that a robot orchestra may be able to play perfectly but that there would be no soul in it. He spoke about all of the art and creations that the human race has made.

After speaking to us Paul spoke to Amal who played the song "I didn't know I was Looking for Love" by Everything but the Girl. This was Paul's pick and he explained that it meant a lot because he spent many years not realising that the woman he loved was with him as his personal assistant every day. It wasn't until she told him how she felt that he was able to tell her he loved her too.