Why do you think smoking was considered to be “cool”?

As children we are often persuaded to start smoking because it is seen as subversive and cool. Let’s face it, how many people took a first drag on a cigarette and enjoyed it? Most people who had a smoke behind the bike sheds coughed and spluttered their way through it and felt awful…and yet so many carried on and became hooked.

It may surprise you to learn that the reason smoking was seen to be cool was all down to Sigmund Freud's nephew Edward Bernays.  Bernays was known as the 'inventor' of public relations and the use of psychological techniques in marketing.

He purposefully set out to link smoking with being 'cool' and started an entire generation of women smoking. 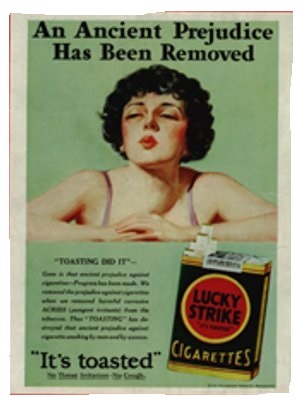 Bernays is well known for inventing a number of the public relations and advertising techniques that revolutionised marketing in the early decades of the 20th century. He was a pioneer in creating what were called "pseudo-events:". These events were carefully stage managed situations that were covered as news by the media outlets of the day.

This is where he decided that he would be able to create the link between smoking and coolness and hook more women into taking up cigarettes.

Bernays hired a number of young women to march in New York's Easter Parade in 1929 while smoking cigarettes. When he arranged this it was a time when public smoking by women was still widely regarded as taboo.

Making sure that he let the media know what he was up to, photographers and reporters were on hand, and he also encouraged the women to refer to the cigarettes as "torches of freedom." In the subsequent reports about the event the women were shown to be fashionable rebels against the discrimination that forbade public smoking by women.

The following day his story made the front page of the newspapers all across America. This led to cities being crowded with women who also started smoking to show their support. Smoking for women was now cool and something to aspire to.

Of course when this story made headlines and more women began to smoke it was not widely known that Bernays had a contract with the American Tobacco Company and had been asked to help grow the female smoking market!

So, the very thing that seemed to be all about rebellion was in fact about joining in a culture of cool created by the very company who were selling the cigarettes.

Something to think about isn’t it?