The Guardian recently republished a fasciniating report about hypnotism with soldiers from the second world war. Not everyone is aware of the history of hypnosis and reading about this report which helps those who fought to cope with thr trauma of war it brings to mind the situation of soldiers in conflicts today or from other more recent conflicts who suffer from PTSD or Post Traumatic Stress Disorder to give it its full name 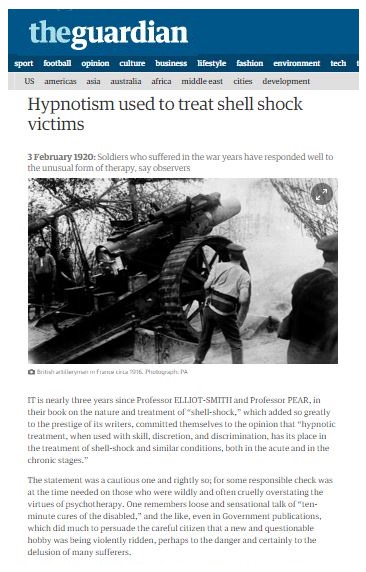 The report first appeared in the Guardian Manchester edition on the 3rd February 1920.

Soldiers who suffered in the war years have responded well to the unusual form of therapy, say observers

"IT is nearly three years since Professor ELLIOT-SMITH and Professor PEAR, in their book on the nature and treatment of “shell-shock,” which added so greatly to the prestige of its writers, committed themselves to the opinion that “hypnotic treatment, when used with skill, discretion, and discrimination, has its place in the treatment of shell-shock and similar conditions, both in the acute and in the chronic stages.”

In a recent lecture at Manchester University Professor PEAR went considerably beyond the position taken up in the book in which he was a collaborator, and cited several interesting cases in which, after careful inquiry had elicited from the patient the cause of his functional nervous disorder, it was possible under hypnotism to restore him.

The British Medical journal also published much of the results helping to give a credence to the work that was being made to help soldiers suffering from the after effects of the conflict.

It is also fascinating to read the accounts of how the sessions took place such as this one described by Doctor Brown...

He was put to sleep and made to live through that experience. He reconstructed the whole scene, shouting loudly and shaking violently, especially in his right hand. Then he became absolutely still, and, when awakened, remained so. “The next morning he was able to shave himself with an ordinary razor, for the first time since his illness.”

It was his own explanation of the cure that “the emotion excited in him by his accident had been bottled up, with the result that he had suffered from the hand tremor.” Was this working off of the emotion, Dr. BROWN asks, the cause of the recovery; and he inclines, from his experience of similar cases, to think it was.

Since this article was originally published of course there have been many thousands of clinical studies into the effective use of hypnotherapy in treatment for a huge variety of issues, from anxiety and stress to fears and phobias, as well as the more well known issues such as helping people to stop smoking or gain control of their weight. If you have ever wondered about the history and story of hypnosis then there is much available to read that can further your knowledge.