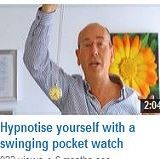 From France comes the news that Fire-fighters were called out to deal with a man frozen to the spot in front of his TV after apparently being hypnotised while watching the latest show by the Canadian hypnotist, Messmer.  Of course that all sounds suspiciously like a publicity stunt to me.

According to French Media the man's family called the emergency services after he stayed immobile for an hour. His wife said she initially laughed at his situation but when she couldn't wake him up she began to panic. Eventually, she managed to wake him up by shouting at him. He said later that he'd felt like he was in a coma. None of it really rings true to anyone who understands that hypnosis is just a normal everyday relaxed state that we drift into and out of all the time naturally. It almost sounds like a great way to publicise your television who.

The BBC World Service leapt on the story and spoke to one of the world's best known stage hypnotists, Peter Powers. He told Dan Damon that it was possible for a person to be hypnotised via their TV. Bear in mind that of course he is only going to reinforce the fact that this could be true rather than cast doubt on it, as that would undermine his own act.

The are some very strict laws governing what can be broadcast and this started off in Britain in the nineteen fifties when a hypnotist show was being filmed and somebody watching what was on one of the monitors fell into a trance and that then sparked of a worldwide legislation to stop hypnotism from being broadcast and that's why whenever you watch TV show that features hypnotism the people have already been hypnotized and it is never actually seen on camera.  Even when they show it on films they could only partially show an induction, a few seconds or a few words at a time. They even do things wrong like turning the revolving hypnotic spiral the wrong way so they're not affecting viewers because you know each person is very very sensitive. I'm not sure what the French Rule is and what the broadcast laws are in France but I'll be very surprised if it exposures the nation, millions of viewers to a full hypnotic induction.

It is very rare but it does happen where someone in the audience may fall into a trance or go to sleep and somebody is alerting the hypnotist on the stage for his assistance. It doesn't happen very often but it can do and I have known it to. In fact I was doing something for Granada TV some years ago and we were filming the hypnosis to show highlights of it during the live show, and one of the cameramen went under then so if some people are really susceptible to it they can be affected. Even over the radio, that's true. I was actually in Island country cork and I was on the radio, having a bit of a rough time with the interviewer who didn't believe in it, saying it is rubbish and demanding that I hypnotise him there and then and so I got out of that one as I knew he wasn’t going to go under. So, I said listen I’ve got something for your listeners..I’d like you all to clasp your hands together...I won’t continue!

Dan Damon ended the interview but asking if he could get all the people around the world to drop their guns. Sadly it wasn’t something that he said he would be able to do.