Often we can look at people who are in the public eye who appear to be very confident performers without knowing what is going on underneath what we see. I help so many people to end panic attacks and anxiety and so many of the clients who work with me do feel that perhaps they are the only person who experiences the intensity of what happens during a panic attack.

Whilst was reading the book “Born standing up” by Steve Martin, Hollywood star and writer, I came across a passage where he talked about his own anxiety attacks and his description may well ring a bell if you feel you have suffered and no one can explain how it feels... 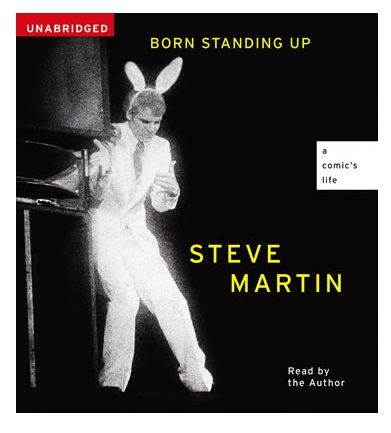 “In the car on the way to the theatre, I felt my mind being torn from its present location and lifted into the ether. My discomfort intensified, and I experienced an eerie distancing from my own self that crystallized into morbid doom. I mutely waited for the feeling to pass. It didn’t, and I finally said, “I feel strange.” We got out of the car, and John, George, and Carole walked me along Sunset Boulevard in the night. I decided to go into the theatre, thinking it might be distracting. During the film, I sat in stoic silence as my heart began to race above two hundred beats per minute and the saliva drained from my mouth so completely that I could not move my tongue. I assumed this was the heart attack I had been waiting for, though I wasn’t feeling pain. I was, however, experiencing extreme fear; I thought I was dying, and I can’t explain to you why I just sat there. After the movie, I considered checking myself in to a hospital. But if I went to the hospital, I would miss work the next day, which might make me expendable at CBS, where my career was just launching. My friends walked me along Sunset again, and I remember humming, “Whenever I feel afraid, I hold my head erect and whistle a happy tune” from The King and I. I spent the night on George and Carole’s couch in absolute terror. I kept wondering, “Am I dying?” but was more concerned with the question “Do I have to quit my job?”

I survived the night and struggled in to work the next morning. I was not relieved, but I was calmer; I confessed to Bob Einstein what had happened and found that as soon as I discussed the symptoms, they arose again with full intensity. However, I somehow maintained my implacable façade.

The cycle was unbreakable. Any relief was followed by the worry of recurrence, which itself provoked the symptoms. After a few weeks, a list of triggers developed. I couldn’t go back into a movie theatre, and I didn’t for at least ten years. I never smoked pot again, or got involved in the era’s preoccupation with illicit substances (I’m sure this event helped me avoid the scourge of cocaine). However, the worst trigger was a certain event that, cruelly, happened every day. It was night. Eventually, I could find my way through the daytime, but as I left work, winding my way up the canyon streets as the sun set, I imagined feeling the slight rise in elevation and the air getting thinner. Nuts, I know. As a teenager, I had mixed a sombre home life with a jubilant life away from the house. Now I could be funny, alert, and involved while nursing internal chaos, believing that death was inching nearer with each eroding episode of terror. I learned over the next months that I could do several things at once: be a comedy writer, be a stand-up comedian, and endure private mortal fear. Thankfully, after a difficult year, my specific dread of nightfall faded. I suppose I was too practical to have such an inconvenient phobia.

I discovered there was a name for what was happening to me. Reading medical and psychology books, I found my symptoms exactly described and named as an anxiety attack. I felt a sense of relief from the simple understanding that I was not alone. I read that these panic attacks were not dangerous, just gravely unpleasant. The symptoms were comparable to the biological changes the body experiences when put in danger, as if you were standing in front of an object of fear, such as an unleashed lion. In an anxiety attack you have all the symptoms of fear, yet there is no lion. I could not let self-doubt or lack of talent cause me to fail at this new writing job—this lion—which was the gateway to my next life as an entertainer. I carefully buried this fear; I was in over my head, but my conscious mind wouldn’t allow that thought to exist, and my body rebelled that night at the movie theatre. At least this is my ten-cent diagnosis. I continued to suffer the attacks while I went on with my work, refusing to let this inner nightmare affect my performing or writing career. Though panic attacks are gone from my life now—they receded as slowly as the ice around Greenland—they were woven throughout two decades of my life. When I think of the moments of elation I have experienced over some of my successes, I am astounded at the number of times they have been accompanied by elation’s hellish opposite."

By working through the panic attacks Steve Martin has been able to move on but it took him 20 years and he still feels some of the anxiety. There are so many techniques that you can be taught that can help you to end that anxious feeling and stop panic attacks once and for all.

If you would like to read more about How to Stop a Panic Attack just click the link. There is also a FREE MP3 download to help you understand why a panic attack happens too. Rest assured that you do not need to live with anxiety and that you can take back control of it and your life.