Hypnotist on Chris Evans Radio show all about Snake Phobias 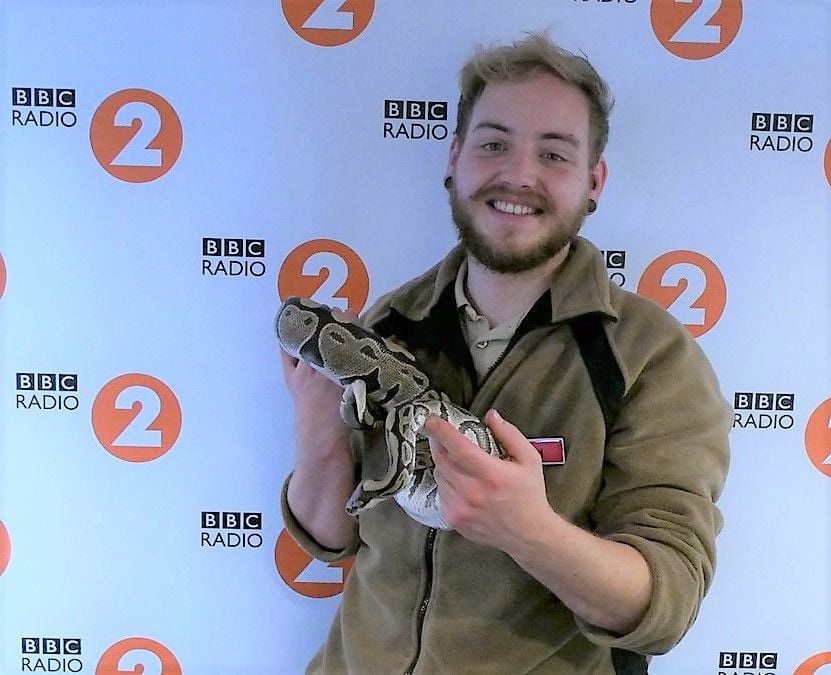 Chris Evans has been talking all about how hypnosis can help to end your fear and phobias on Radio Two's breakfast show. His idea was to use a hypnotist to help sports reporter Vassos overcome his snake phobia..

As Chris himself said "I know loads of people who have had hypnotherapy to help them end a snake phobia and it always works!"

It's great to hear Chris talking about how his experience of hypnotists helping with phobias is so positive.

Watch the video below and see Vassos with the snake.

My own work helping to end phobias

It's one of the most common fears and phobias that I am lucky enough to be able to help people overcome. It's great to see how people's faces change as they realise they can do things they never felt comfortable even thinking about.

Hypnosis is nothing like you may think if you watch TV or see stage shows. You can listen to my interview with Jonathan Ross on BBC Radio 2 where we spoke all about Simon Cowell being Hypnotised on Britains Got Talent....

I have appeared on the radio live with snakes myself. Here's me and a Python who was sliding down my microphone and round my neck whilst I tried to broadcast... 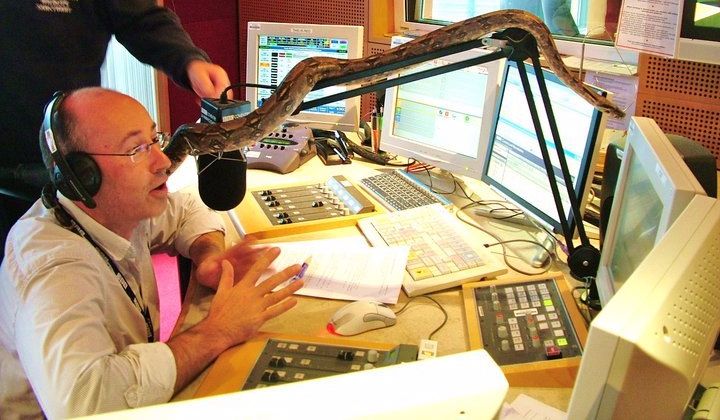 You can even see me with a load of snakes when I helped one reporter with her fear... 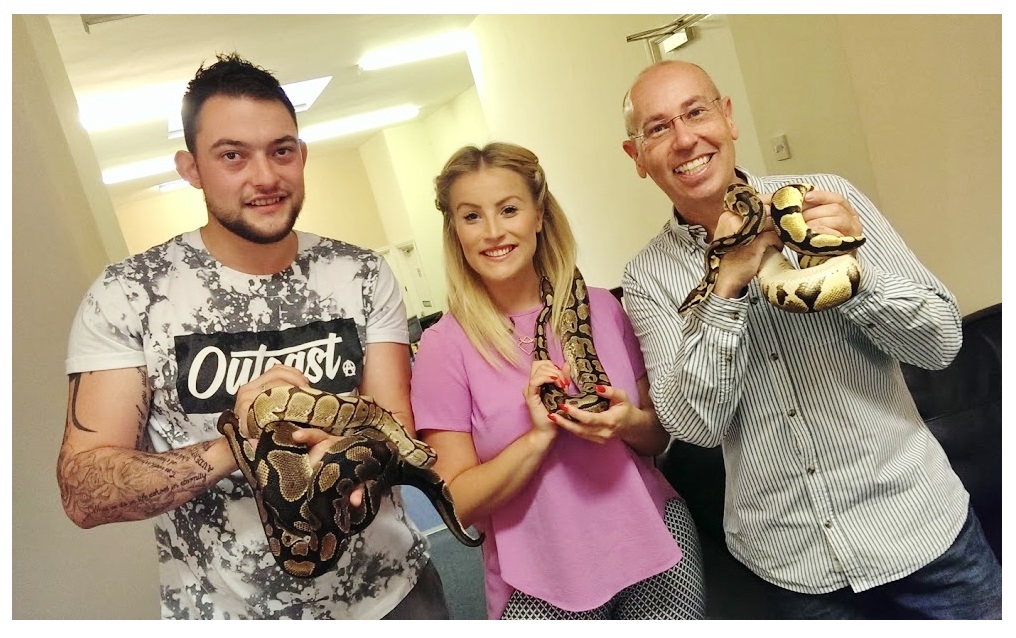 I visited the offices of the Redditch Standard in the town centre to talk all about fears and phobias after a story about a snake that escaped appeared on the front page of last weeks paper.  http://redditchstandard.co.uk/news/python-makes-a-speedy-getaway-12385/ 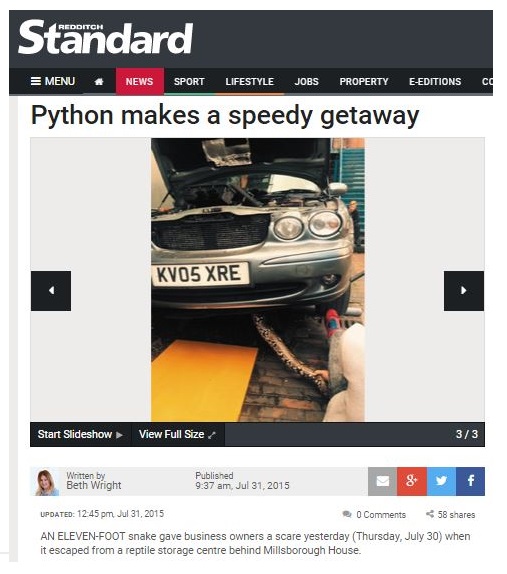 Here's a short video about how you can overcome any fear or phobia and why...

We learn all of our fears and phobias, ususally as children. This is is of course really good news because it means that if you learnt it...then you can unlearn it too!

Eliza the Snake on BBC Radio 2

Chris arranged for Chessington Zoo to bring in a Royal Python called Eliza into the studio so that he could test Vassos on how well the hypnosis sessions he had worked for him. He explained that she is actually a very docile creature and simply likes to relax and sleep. After introducing the snake and his handler they sent him her outside to meet Vassos in private before bringing them back into the studio.

Vassos had three sessions with Stuart to help his phobia so that he was able to say that he was actually looking forward to being able to see the snake in the studio. Chris explained that he really wanted to get Vassos some help as he was a friend, but he knew over 100 people who had hypnotherapy and all of them were able to find out that it helped them deal with their problem.

Vassos said "Up to about ten minutes ago I was confident then I felt a bit nervous. It's been quite an education doing this. Generally it has been a great experience in life."

Chris replied "We caught you on film before coming into the studio and you looked ill!"

Vassos was still a little nervous about seeing the snake at this point saying that there was a part of his brain that had an acute fear of snakes. This is something that can also be dealt with. Perhaps in this case his old ways of thinking have simply not been dealt with yet.

Ed the snake handler from Chessington Zoo then brought the snake Eliza to the door. Once she came in Vassos was breathing a little more heavily but was happy for the snake to be brought closer to him.

His sport presenter Vassos Alexander has a terrible phobia of snakes and Chris had the idea of using hypnosis to help him end that fear forever. You can see Vassos with the snake below after working with Stuart Brown over three sessions ! 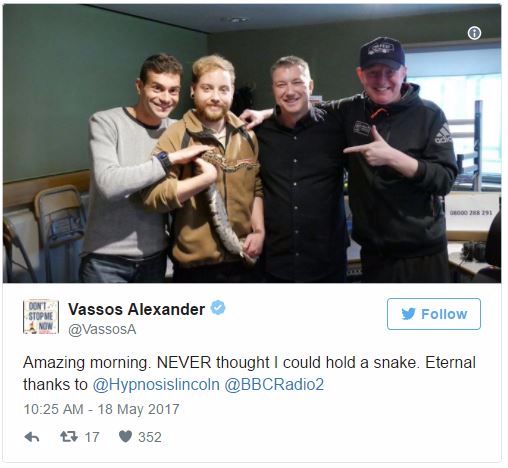 The moment of truth

The snake box was then opened so that he could see right inside. Although he wasn't quite ready to hold the snake he did stroke her and exclaimed.... "I touched a Snake !!!"

After playing a record...Union of the Snake by Duran Duran...Vassos said that he was happy to hold the snake and so was able to have Eliza on him happily. Clearly at this point he was feeling very proud of how far he had come.

No one ever needs to live with a fear or phobia. It can cause you to miss out on so many good things in life. With the right help you can let it go forever and once you have, you will wish you had seen how easy it was years ago!