Star of hit sitcom Friends, Courteney Cox has reportedly turning to a hypnotherapist to help her deal with an issue that has caused her a great deal of relationship heartache.

It was reported last year that her relationship with Snow Patrol pianist and guitarist Johnny McDaid, after a fear of leaving her house escalated to the point that the relationship was unable to continue. After the split this just made the situation worse and so Courteney turned to hypnosis to help her overcome the fear.

This week newspapers such as The Mail have suggested that their relationship is back on again after pictures of them engaged in a passionate kiss appeared, that seem to show that the problems may well now be behind them. 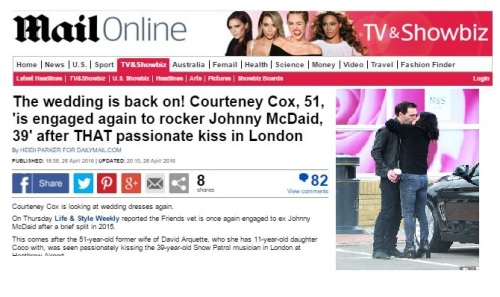 According to the reliable old witness known as a source.. "Johnny pretty much walked out because her agoraphobia was driving him crazy. She never left the house and the rare occasion she couldn't avoid it was an epic nightmare coaxing her out the door"

From the sound of it the source didn't seem to have much empathy for a condition that can cause people a great deal of stress. The good news is that once you get help you can overcome problems like this and so it seems that having hypnotherapy for agoraphobia gave her the result that she wanted.

She has even been out on shopping trips with her co-star from Friends Jennifer Aniston.

Now we hear that they are planning a wedding in the autumn, so wish both of them every happiness.