Derren Brown blows the lid on stooges in stage hypnotism

As an entertainer and showman Derren Brown uses his charisma and showmanship to make us think that things we are seeing are really happening in front of our eyes. But, can we really believe what we are seeing with him or with any other performer or mentalist who may well be trying to pull the wool over our eyes? 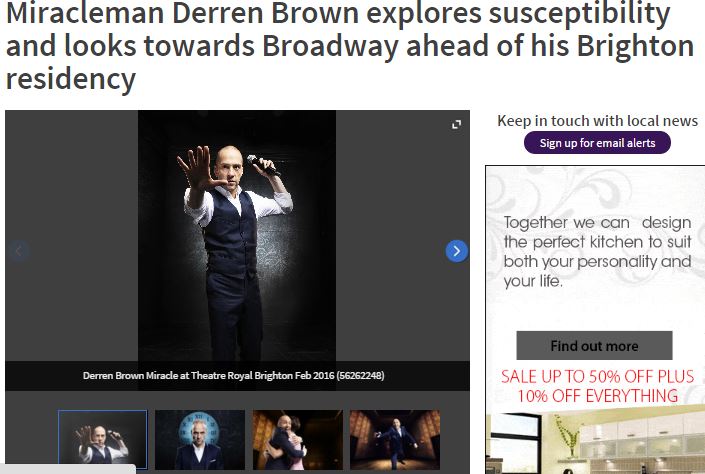 Well, of course we can’t believe it. That’s part of the reason that it can be so entertaining. If what we see seems impossible, but somehow seems to be happening in front of our eyes then we will have a natural curiosity towards how it’s being achieved.

Although he is of course famous for his television specials on Channel Four, Derren Brown still tours extensively and explains that he loves live work even more than his TV shows.

Often in the past we have witnessed him hypnotising people on stage and television and then influencing them in the way that they think. It’s something that I have written about before and how we sometimes need to take things with a pinch of salt. The ITV hypnosis game show “You’re Back in the Room” was a great example of what I describe as people just playing along.

Now that Derren is touring his new show Miracle he has been lifting the lid on how stage hypnotists work and why we shouldn’t believe all that we see.

Speaking to the Argus in Brighton before appearing there, he explained that in this show he was doing no hypnosis on stage at all.

There is no hypnotism in this show. Hypnotism is quite a grey area – of what is and what isn’t hypnotism. It’s a word like magic – a shorthand term for something. You know a magician isn’t doing magic – he’s doing a series of things creating an experience. If you go to see a stage hypnotist you can have people playing along – is that a form of hypnotism? Is a charismatic speaker or someone who helps you give up smoking a form of hypnotism? It’s very difficult to say what it is.

If you see what he is saying he is basically explaining that when you see someone on stage they really are just playing along. It is a chance to do things they would never normally do and have an excuse, because they can say they were hypnotised! What a stage hypnotist is looking for is someone who wants to play along. They need the most outgoing people on stage, especially if those people would not normally do that kind of thing.

If you want to see a master showman at work then I highly recommend his live shows. Just bear in mind that not everything you see can be believed!

You can see some of the secrets of You're Back in the Room in the video below...

You're Back in the Room 2016 returns to ITV in March