Hypnotised on “You’re back in the room” ...or is it just the Generation game?

The canons are primed and loaded with gunpowder. The musketeers are taking up their position on the battlements, their sights trained on the enemy. Not since Jonathan Swift told us the tale of the islands of Lilliput and Blefuscu, and their long war over preferred methods of egg consumption have two sides been so at odds. At least not in terms of a Saturday night television show. 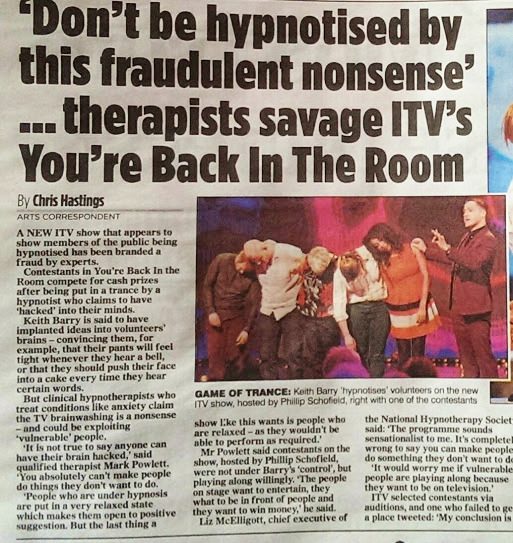 When ITV announced that they were bringing stage hypnosis back to television with “You’re Back in the Room” last spring, few noticed apart from in the hypnotherapy world. I first saw Paul McKenna on stage nearly 20 years ago and this started a fascination with the mind that stayed with me through careers as an actor and radio presenter until I myself trained as a Clinical Hypnotherapist and started my own practice. Despite coming from a performing background I had no desire to be a stage hypnotist. I had spent enough time in the spotlight and now I was happy to move away from the limelight.

Debate has been heated in certain circles over whether the participants on the show are really hypnotised or not. Arguments have started between some Hypnotherapists and Stage Hypnotists who think they have a definitive answer. I was even quoted in one tabloid story; although my quoted words and the salacious clickbait headline did not quite tally with what I had actually said. These are the perils of having an opinion. I was sent so many messages from both sides in the battle that showed me there was a huge gulf between what people were thinking about the show.

I wonder if the talk of whether someone is hypnotised on the show or not is taking us away from what the programme is really about. It is entertainment, pure and simple. Hypnosis can be seen as a state of relaxation. You are aware of everything that is happening, and most importantly you are always in control. The trailers for the programme tell us that the contestants have had their “minds hacked” and “they wouldn’t be doing these things if they could help it”. If that was the case then surely stage hypnotists would be robbing banks and then hypnotising the police to forget all about it.

That relaxed state is perfectly natural and just like when you fall asleep or wake up in the morning.

But Hypnotherapy is about so much more than that. When someone visits a hypnotherapist they have taken a huge step and the fact they can speak to someone who is there for them, and won’t judge them, often makes a huge difference even before they have arrived for an appointment. Hypnotherapy may be just a name and it’s not just about getting people to close their eyes and listen to you, it is about listening to them and using whatever other tools you have to help them achieve what they really want.

"They are under Mind Control"

So, the talk of whether they are really hypnotised and under mind control drives us away from the fact that a television show is really about economics. The show has been in production for a year now. There were multiple auditions and the contestants have been picked for being the most entertaining. When you have Philip Schofield hosting a prime time Saturday Night Show and all that entails, you don’t take risks. You pick the people who are the most compliant and are happy to show off.

Read about how they were selected to take part HERE : Are They Faking being hypnotised on You're Back in the Room


I certainly wouldn’t claim that the hypnotist on the show Keith Barry hasn’t hypnotised them. In fact he is a hugely entertaining performer and I am sure he will make the show a success. What I would say however is that if you took a bunch of people and told them they could be on a Saturday night television show, enjoy the feeling of having an audience laugh at their antics, and win some money, then would you really need them to be hypnotised?

When you watch the show, keep in mind that many of the games may ring a bell.  Perhaps they bear a similarity to the antics that used to be in the Generation Game in times past. Of course, that programme was a Saturday evening entertainment show where people had no problem making fools of themselves for a chance to be famous for fifteen minutes and a glance at the conveyor belt.

They of course, weren’t hypnotised...or were they?