A fear of spiders is one of the most common phobias that I come across. In fact is is relatively easy to often help anyone who finds it difficult to let go of that fear within three or four sessions. Most clients already feel better after the first. Unlike the Speakmans I would not suggest that you can be free of a fear in one hour. Of course because this is a TV show you miss the fact that they spend several hours and sometimes several days with the people that they feature. It will take you longer than an hour, but do you think it would be wonderful to leave your fear behind forever?

If you have a fear of spiders or any other phobia it is important to understand that you did not always have this. We are only born with two fears, a fear of falling, and a fear of loud noises. Everything else was just created because of an incident or something that happened in your imagination. This means that it is much easier to move on and leave that fear or phobia behind than you would perhaps think. If you would like help with a fear of spiders, a fear of flying, heights, driving or any other fear then please do get in touch with me and I can advise and help you. You can call me on 07980 233160 or email me by clicking on [email protected]

Julie says that she cannot imagine a day without being freaked out by spiders. This is a very common respone. She lives with her partner Dave and their two sons. She cannot sleep at night and keeps waking up her partner as well. The fear affects her so badly. I have worked with so many spider phobia clients that I too have seen such extreme reactions. Imagine being so scared of spiders that you will not even enter certain rooms in your own house?

I was interested to see that they had moved into a dream home in the country. As a very bad spider phobic I cannot imagine why she would have been able to move to somewhere rural and also works out of a shed like office in her garden. Spider phobia sufferers that I have met would not have dreamed of working and living in such a place. Perhaps this is an indication that things are not as bad as they are being shown. Once we saw that she also has horses I really started to wonder how she could be in such places. My experience of those who have worries about spiders must differ from those of the Speakmans.

When Dave said that once she got over her spider phobia she could start living life I had to admit that having watched her in her lovely house in the country, seeing her working with dogs in her own shed/office and with her horses and the stables it would appear that her life is not being affected as much as we are being told.

When the voiceover stated that the fear affects every minute of her day this does not seem to be the case from what we have seen of her life at all.

If you feel that you are worried about spiders all the time you can overcome your fear. Working with phobia clients I find that the fear of spiders is one of the most common phobias that I deal with as a hypnotherapist. In the story we saw here there was an event with her mother where the screaming that came from her was passed on. I often find similar in that a parent, often a mother, passes on their own fear.

I was surprised when the Speakmans said it was the worst spider phobia they had worked with as I have worked with cases that have been worse than this and I assumed that they would see a great deal of spider phobia clients. Perhaps I misunderstood.

The good news is that on average I only see clients for three to four sessions and then they are over their fear and do not need to worry any more. I use a variety of techniques as do the Speakmans. We really do not see all of the therapy that they do. I am not sure why this is not shown but they clearly do want to create some mystique. As well as talking about the issue I use techniques such as hypnotherapy, NLP and EFT which have proven to be very successful at helping spider phobics.

In fact I even have a picture on here of a client who went and held a tarantula after working with me which is something that you do not need to do, but really shows that you can lose your spider fear and move forward. If you want to read all about it it's below !! 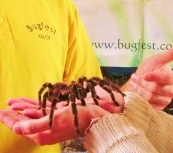 My client holding a tarantula after successful treatment for spider phobia !