He may be better known as a man of mystery and mentalism, a magician who messes with your mind, but now Derren Brown wants to tell you more about your own mind and spread his thoughts on what he feel is becoming more and more elusive... Happiness. 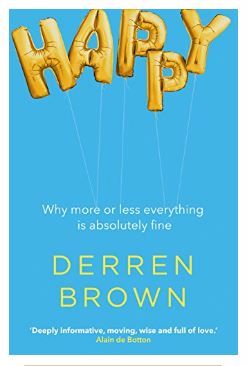 Alongside his TV shows like Pushed to the Edge Apocalypse and Trick or Treat and as well as performing in his stage shows he has also found time to write a new book called Happy: Why More Or Less Everything Is Absolutely Fine. It’s described as a serious-minded inquiry into how “intellectual giants and astonishing thinkers”, as he puts it, from Socrates to the Stoics, Nietzsche and Freud, have tackled the happiness question.

Earlier in the summer his latest venture, a thrill ride at Thorpe Park called Ghost Train opened so it is fair to say that Derren Brown knows how to juggle as well as do magic tricks.

In fact he has spent several years researching and writing the book. It’s actually his seventh book and if you have ever read any of the others you will know that he takes the time and effort to write his books. He isn’t the type to employ a ghost writer or fill his book with photographs and pictures just to take up space. If he is going to write about something then he will write thoughtfully and with insight.

You can have a FREE Trial of Audible and download any book that you want to keep by clicking the banner below....

It's not a Self Help Book

What he is keen to point out is that this isn’t some sort of self help quick fix book. Speaking to the Huffington Post he explained that he is not a fan of the myths that he feels they put out..

He explains that this is because often it seems that you can get what you want just magically and that there is nothing other than disappointment in them.

Perhaps the one book that became a movement that he singles out would be The Secret by Rhonda Byrne, which came out ten years ago and even spawned a film, although perhaps it was the other way round and the film spawned the book depending on your point of view. The basic tenet of that was that if you think positively then you will attract positive energy and in turn great things will happen to you as a result.

What he doesn’t like is that concept that makes it seem like by wishing and demanding then the universe will give us what we desire. He especially dislikes the fact that it seems to link to money and finance most of the time.

His view of life is one that is more realistic and perhaps goes back to thinking even further from the past than you may well first realise.

The Greeks and the Romans understood that in fact in life things will happen that we cannot control, what we can of course call fate.

He draws on the school of philosophy called Stoicism founded by the Greeks in the 3rd Century BC.  (the name comes from the Stoa Poikile in Athens, a public square where they met)

He is at pains to point out that the book is to help people but will not provide all of the answers, especially glib ones.

"In this wise and perceptive book Derren Brown has conjoined personal experience, profoundly sensible psychology and the magic of philosophy to produce a really excellent account of how to be happy - really, maturely, properly happy. This is a wonderfully educative - and enjoyable! - book, and should be on everyone's reading list, always. " - A.C. Grayling

Watch the intervew and Review of Happy from BBC Breakfast below:

Life can be full of anxiety today

He know that life nowadays can be filled with things that cause us to feel stressed and anxious, just looking at advertising we are fed the images of a perfect life and asked to compare it to our own.

His approach and theory on finding happiness is to understand that in life things will happen that we just cannot control. Knowing this then we can learn to focus on the things that we can control, this is the basic premise of Stoicism and the main theme of the book.

Every chapter of Happy ends with a smiley faced emoji which whilst it seems it may simplify the thoughts in fact really does help things to seem perhaps more achievable then they otherwise may be.

To be happy we must accept that we cannot have it all. The ancient understood that you should limit your desires, because by doing this you value those things more and in turn can value your own happiness with much more ease.

Speaking to Simon Mayo on Radio 2 he also explained that he does not believe that money itself can buy happiness. "After earning that comfortable amount you do not get happier and happier when you earn more."

He also explained that he thinks that some people have a personality that can help them to be more predisposed to being happy than some others. He likens it to people having a photographic memory and that in fact you can learn how to do the same things for yourself.

"I think we are fed a message that happiness is through goal setting. I think that is wrong. You do that while life passes you by and I think that is all wrong and can make you feel that you have failed. It can lead to anxiety and feeling that life has passed you by"

Asked by Simon Mayo if there was something wrong with positve thinking he explained that wasn't really what he was having a go at. He explained again that in The Secret you can decide what you want and you act as if you already have it and the universe will provide that to you. "First of all this is rubbish, and it is infantile rubbish. Reality is about realising that the universe is quite indifferent to us. If we decide those things we can't control are fine things get easier"

Asked about Paul McKenna and his book I can make you Happy, he explained that he hadn't actually read it, although he does think Paul is Brilliant.

"Til now, we've known Derren Brown as a supreme illusionist and magician. Now he surprises us with a new and brilliant identity: as a philosopher. Not just any philosopher. Brown takes philosophy back to its truest task: that of helping us to live and die well. His book is deeply informative, moving, wise and full of love. It sets out to change lives - and it will. Derren has pulled off a properly implausible trick: that of making the deepest ideas relevant, humane and urgent." - Alain de Botton

There was a point a year or two ago when the media couldn’t get enough of Mindfulness but now it seems to have dropped out of the top ten new ideas. Of course, it’s not new at all, it’s just that sometimes things take a while to become more mainstream. The interesting thing is that he explains that he doesn’t practice it in any formal way, he just takes the ideas and uses them in a way that helps.

It’s something that I often talk to people about. The real principle is just living in the moment. Not thinking about the past that you cannot change, or the future that hasn’t happened yet. Enjoy the now, take a walk and look at the leaves on the trees  and feel the gentle breeze, it’s what my dog does when he is out, he is a master of living in the moment. That moment often ends up in the lake and he enjoys every moment of that too.

You can read more reviews of Happy by Derren Brown and buy it from Amazon by clicking the picture below.