A new book called Can’t. Just. Stop. An Investigation of Compulsions by Sharon Begley helps to explain OCD behaviour and show you ways in which you can understand its cause and therefore work to help free yourself from the feelings of stress and anxiety that it can cause. 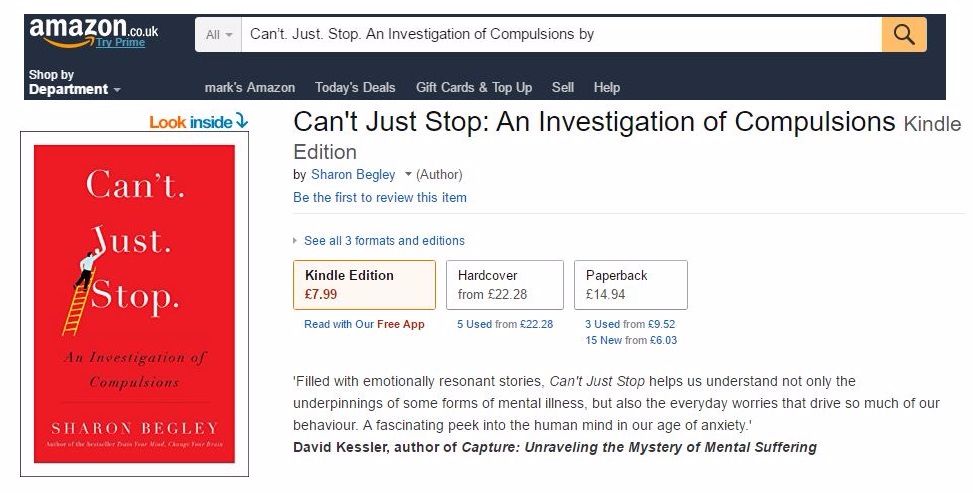 There are many motivations for human behaviour, these include the basic drives for food, shelter and sex which we are all most aware of. They also include more complicated ones, such as compassion, envy and anger.

Compulsion is something that some people suffer from more than others. Many may have a mild symptom of wondering if the door really was locked or if the oven is left on, but for some these fleeting thoughts can become more intense and cause great distress.

As Sharon Begley explains..Compulsions come from a need that is desperate and tortured. They may bring a relief, but they bring little enjoyment, and while one part of our brain desperately wishes to stop them, another is afraid of stopping.

We describe as “compulsive” someone who reads, tweets, steals, cleans, watches birds, lies, blogs, shops, checks Facebook, eats or Snapchats etc not only frequently but with the urgency of one who is not fully in control of their behaviour.

Much research has been undertaken into what causes these compulsions and the effects that they have and a growing body of scientific evidence shows that they are often a response to anxiety.

Because we are not in control in part of our life we grab hold of any behaviour that offers a short term relief by giving us an illusion of control. We try to take control by using something else to focus on.

Writing in The Guardian Sharon explained her own thoughts...

“I used to view life-altering compulsions as foreign and almost frightening. But in the course of my research, two things happened. First, when I got to know people who were compulsive, their behaviour didn’t seem unreasonable at all. It seemed like an understandable response to angst that would otherwise eat them alive. Second, I realised that although people with the most extreme compulsions seem like outliers, the anxiety that drives them to those extremes is universal – and underlies milder compulsions, too. Actively behaving to allay anxiety is a deep and ancient impulse.”

It is estimated that about 1% of the population suffer from obsessive-compulsive disorder, known to most as OCD.

Why do we feel that compulsion?

Compulsions are all about avoiding unpleasant outcomes. They are repetitive behaviours we engage in to alleviate the angst brought on by the possibility of negative consequences. But the actual behaviour is often unpleasant – or at least not particularly rewarding, especially after umpteen rounds of it. At its simplest, the anxiety takes the form of the thought: “If I don’t do this, something terrible will happen.” If I do not check my fiancé’s web history, I will not know whether he is cheating. If I do not religiously organise my cupboards, my home will be engulfed in chaos.

You can find out more about the book here : Just click the link to find it on Amazon....

Can’t. Just. Stop. An Investigation of Compulsions by Sharon Begley is published by Robinson Books at £14.99 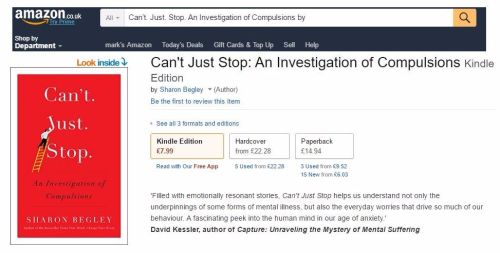