I spend the weekend away at an activity centre, climbing, abseiling and zooming down zip-wires. I love getting out and having an adventure with the family. Some people find a fear of heights means that they are unable to even think about going up high, for others it can be a fear od spiders or even snakes.

After the Redditch Standard published a story about a snake who escaped into a car engine I received many calls and emails asking for help. I went to see the snake itself and talk to a reporter at the Redditch Standard all about how we learn our fears and phobias. This is in fact great news because...this means that we can unlearn them too! No one needs to live with any fear of phobia. Withe the right help and support you can let it go. Hypnotherapy works really well in turning round the way that you feel and letting you move on with your life. 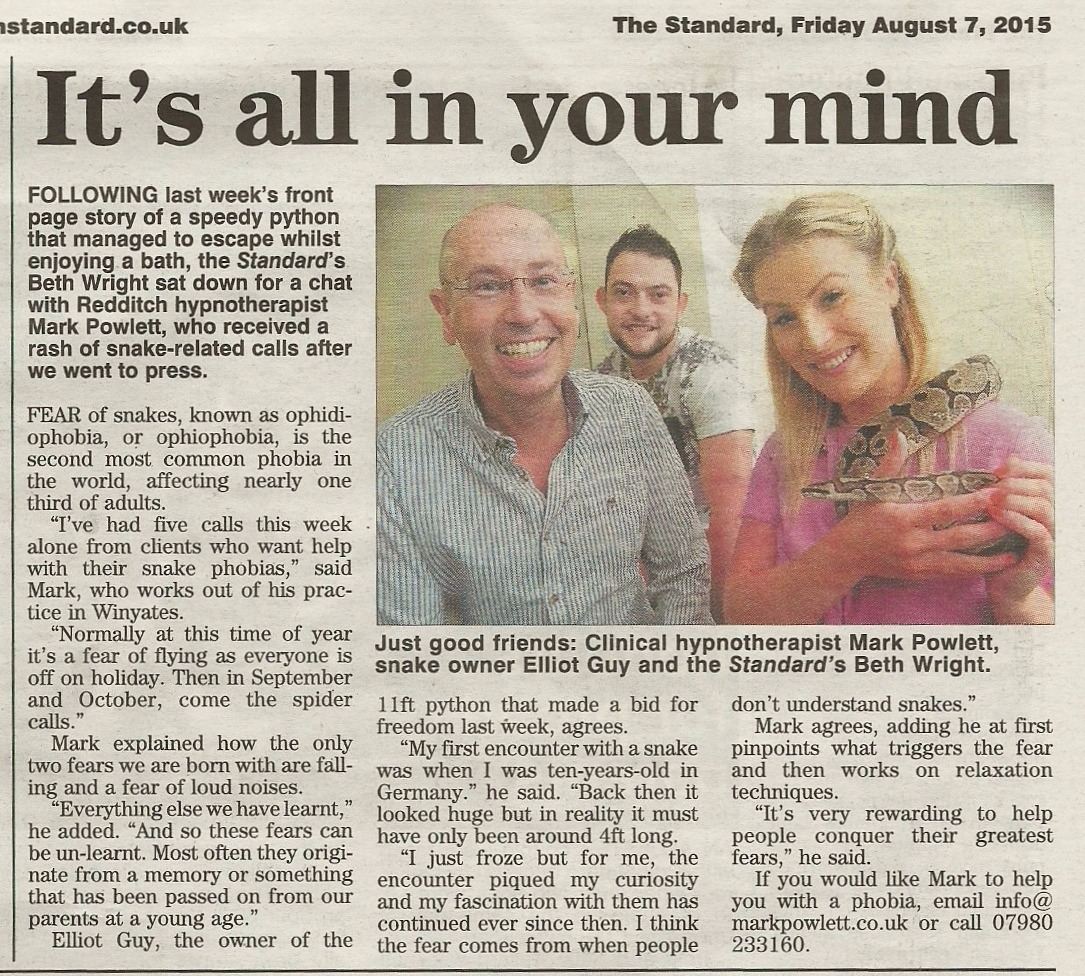 The Story first appeard in the Redditch Standard on Friday 7th August and was written by reporter Beth Wright who you can see was happy to handle the snakes herself!

FEAR of snakes, known as ophidiophobia, or ophiophobia, is the second most common phobia in the world, affecting nearly one third of adults.

“I’ve had five calls this week alone from clients who want help with their snake phobias,” said Mark, who works out of his practice in Winyates.

“Normally at this time of year it’s a fear of flying as everyone is off on holiday. Then in September and October, come the spider calls.”

Mark explained how the only two fears we are born with are falling and a fear of loud noises.

“Everything else we have learnt,” he added. “And so these fears can be un-learnt. Most often they originate from a memory or something that has been passed on from our parents at a young age.”

Elliot Guy, the owner of the 11ft python that made a bid for freedom last week, agrees.

“My first encounter with a snake was when I was ten-years-old in Germany.” he said. “Back then it looked huge but in reality it must have only been around 4ft long.

“I just froze but for me, the encounter piqued my curiosity and my fascination with them has continued ever since then.

“I think the fear comes from when people don’t understand snakes.”

Mark agrees, adding he at first pinpoints what triggers the fear and then works on relaxation techniques.