Hypnotist posters from around 1900

These fascinating posters give some insight into how hypnosis was used as entertainment over 100 years ago. They also show that people were more open thinking than you may give them credit for!

This set of amusing turn-of-the-century hypnotism posters show hypnotised people up to various strange shenanigans: a group of men wield brooms and umbrellas as though musical instruments; women ride men like horses; and (remembering that it is more than a century ago) a man dresses in women’s clothes, and two men canoodle. With its roots in “mesmerism”, the phenomena of hypnotism began to gain momentum with the work of Scottish surgeon James Braid (1795–1860), an early pioneer of the practise, paving the way for it to hit the mainstream toward the end of the 19th century.

There is not much information available about these five images below only that they were the product of The Donaldson Lithographing Co. based in Newport, Kentucky and seem to be from around 1900. They were discovered by The Public Domain Review

You can see that the top has a blank strip which would have been used to write up the name of the performer and venue when they were posted up around the city where the show was to play.

This first one is fascinating because apart from showing a man who thinks he is fishing, there is also another man who is dressed in ladies formal wear, with a dress and a hat that is covered in feathers. For an image over one hundred years old it's quite remarkable that the cross dressing man would be used for publicity. We may think that years back this may put people off, but clearly it may also attract and even bigger audience. You can also see that there is someone riding some chairs as if they are a horse. This seems to be a theme to these pictures. 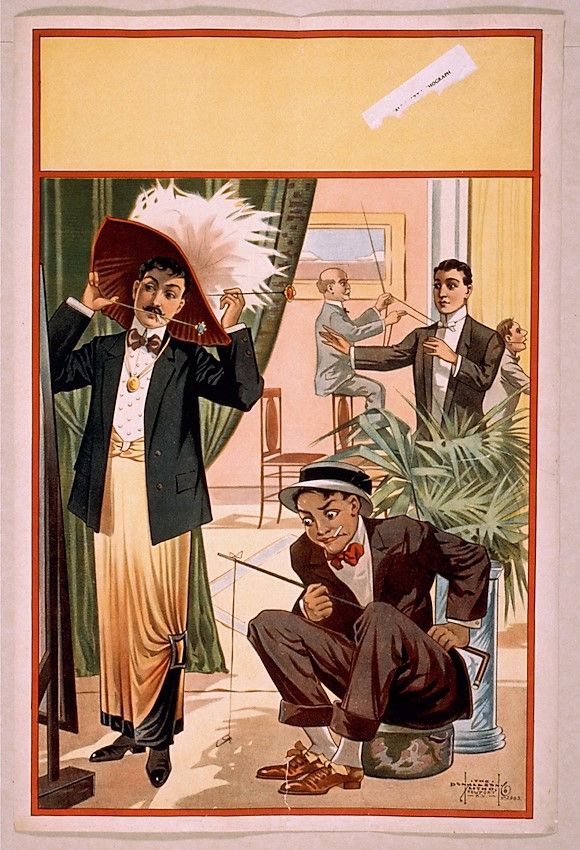 This second picture also has the popular image of someone riding a horse. This time the lady is actually riding a gentleman who has a bit between his teeth and she even has a whip in her hand. In the foreground we see another gentleman who is playing a broom like an instrument. This may be somethign we think of from the 70's and a cliche of hypnosis stage shows, but this shows that the idea came about a lot earlier than that. 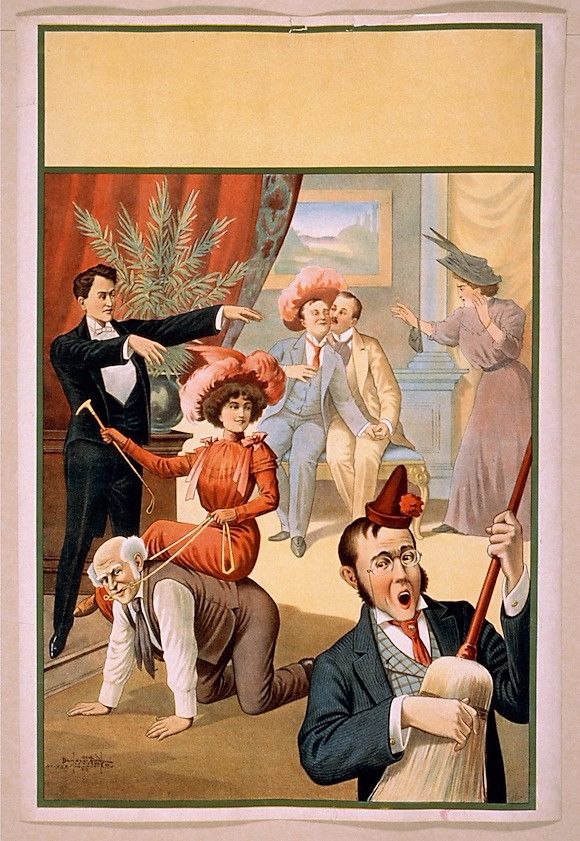 This next one has yet more horse riding antics. In fact the gentleman riding this chair is not unlike the ex racing commentator John McCririck, with his busy moustache and hat. The old favorite of instrument playing also takes place here. 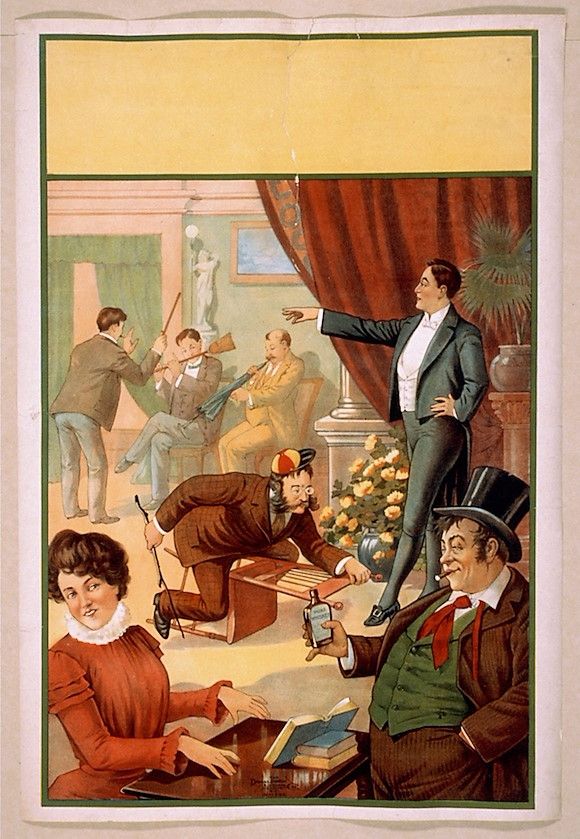 As you may be noticing there are certain themes that run through, and so we have more musicians playing, although this time the lady riding a man seems to be floating in the air, so perhaps levitation is also playing its part. 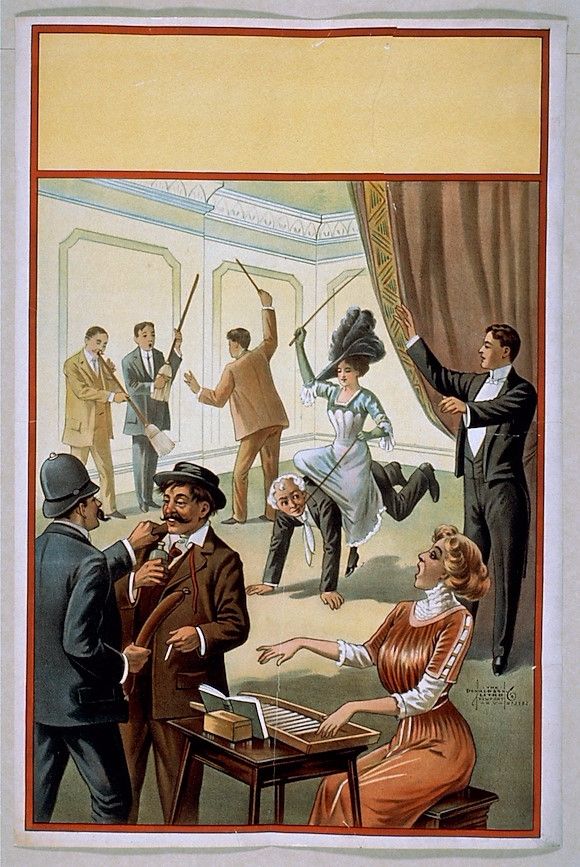 This final one seems to be suggesting that perhaps there is also some sort of mentalist act happening. Maybe the blindfold is part of the act and the man with the blackboard will write down what the angles speak to his assistant. 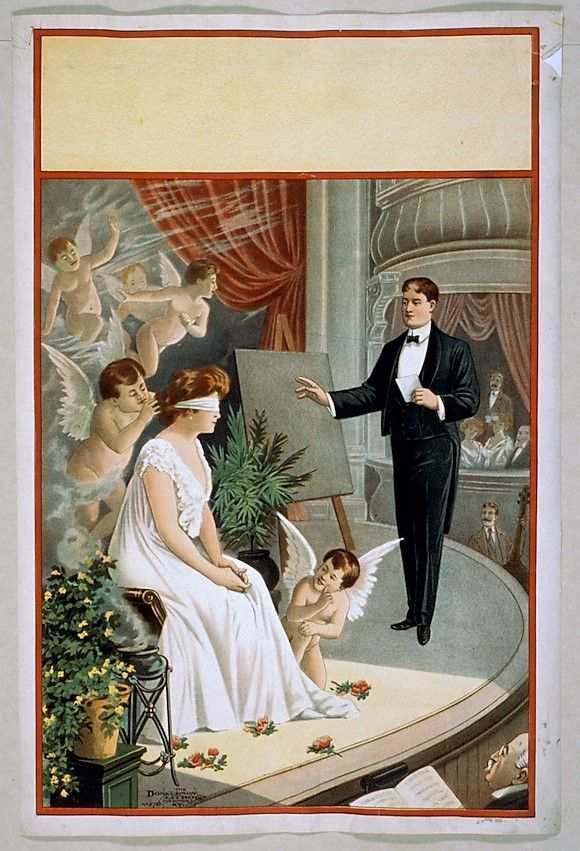 It is surprising that the act of stage hypnosis and magic may not have seemed to move on as much as you would have imagined.

If you want to watch me speaking about the latest version of hypnosis in entertainment on Television with TV shows like "You're Back in the Room" or the US version called "Hypnotize Me" you can take a look at the youtube video below....