News from the Lancashire Telegraph reports all about a new service being offered by the NHS in Lancashire for Mums to be.

Pregnancy can be a stressful time and the help that is being offered can make a real change to the way that mums feel during labour as well as the rest of the time they are pregnant. 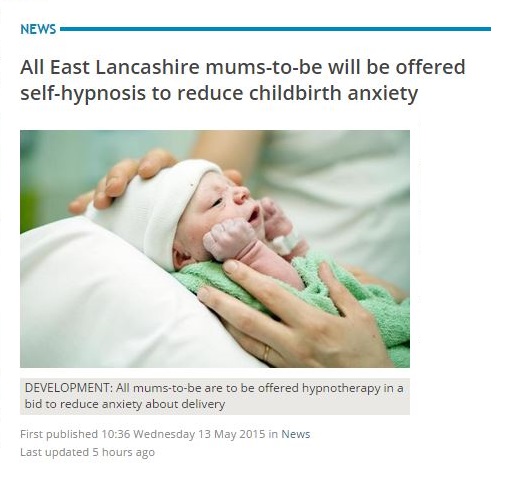 Following a three-year test at the Blackburn and Burnley maternity centres showed it was a successful addition to care, the chance for hypnotherapy will now be offered to all the mums to be in the area by  the East Lancashire Hospitals NHS Trust

It will cost just £4.83 to the NHS and for the first time there will be no charge for the mums themselves. This is a big chance because in the past when hypnosis has been offered by the NHS it has been at cost to the patients, and of course not everyone can afford it.

The University of Central Lancashire (UCLan) conducted the largest randomised controlled UK trial into self-hypnosis during labour with more than 200 first-time mothers at the maternity unit at Burnley General Hospital and the Blackburn Birthing Centre on Park Lee Road as well as another 400 in Liverpool and Preston.

What does the scheme include?

This new pilot initiative will  included face-to-face group sessions. Typicially there is a more focussed help with one to one sessions, however this is clearly a really great start and a scheme to be welcomed.

International childbirth expert and UCLan Professor Soo Downe who led the trial, said: “The results do suggest the therapy might reduce postnatal anxiety and fear about childbirth, which would suggest there may be benefits for their next pregnancy.”

Research findings show that of the women who were randomised to self-hypnosis during pregnancy, 27.9 per cent requested an epidural in comparison to 30.3 per cent of the women in the control group.

Let’s hope that other hospitals and NHS trusts are watching this scheme and seeing the difference that it makes. Learning these techniques will not only help during pregnancy but also afterwards in post labour and into the lives of the children themselves too.

You can read about hypnotherapy for pregnancy here... Hypnosis for Natal Anxiety