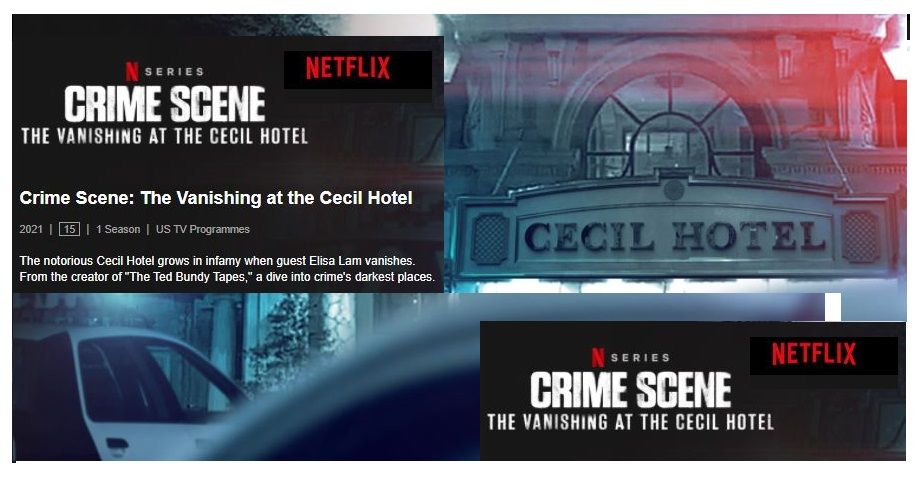 You know when people put “Spoiler Alert” ahead of posts like this so as not to spoil your enjoyment?

Well, in this case I want you to know what happens at the end of four hours of Netflix Documentary Crime Scene: The Vanishing at the Cecil Hotel because what appears to be an amazing exploration into a mysterious murder at a Skid Row hotel in Los Angeles is actually just Netflix dragging out one woman’s mental health issues by leading you down a garden path and then glossing over the family she left behind when she took her own life.

No one murdered her, she was a Canadian student who went missing in the hotel under mysterious circumstances, before later being discovered drowned.

But that isn’t the road the documentary wants to lead us down. All signs point to a murderer and a gang of internet sleuths who care more for video clicks than being people who will try and solve the case.

As things unfold we see these ghoulish people who journey to the hotel and film themselves there having a wonderful time creating internet content as influencers to boost their YouTube views. Of course, if she had been murdered then perhaps they would have stumbled on a missing piece of evidence which cracked the case. Even so the glee that so many day trippers show on their faces is disturbing in itself.

It almost seems like the police investigators are not doing their job. This it turns out is only because we are not told the things they know until nearer the end. In fact one of the most crucial pieces of evidence about the lid of the water tank that Elise drowned in being left off is something that is know much sooner than we are led to believe. We are given the impression that she was shut in a water tank, in fact she climbed in herself and the lid was still off.

The Video in the Elevator

We see security footage with Lam, looking very spooked and acting strangly, in an elevator communicating hysterically. But is there someone else there? Is it a murderer? Who can tell?

I am not the only person to think this, although perhaps not enough people are able to get together to discuss things at the moment.

Mark Serrels sums things up nicely when he writes for cnet: “It's bad. And not just bad. Crime Scene: The Vanishing at the Cecil Hotel is bloated, dull and confusing. It's irresponsible and dishonest, indulging conspiracy theories that put already vulnerable victims at further risk.”

We learn all about a potential suspect called Morbid who is a death metal singer and many people think he could well be the murderer. They pile on to him and troll him with violent threats of revenge. By many people I mean the people on the internet who are gaining YouTube views. Of course it isn’t him, and this is for two reasons. One, the Mexican singer wasn’t even in the US when it happened and Two, Elisa Lam wasn’t murdered. She died in a tragic accident which was related to her mental health issues and the footage of her in the elevator that went viral really offers us a glimpse into what must have been a terrifying experience for her. An experience in her mind with noone else involved.

If Netflix had billed Crime Scene: The Vanishing at the Cecil Hotel as an exploration into the weird world of the internet and a tragic story of one woman’s tragic death that would have been one thing, but they didn’t do that.

However, that is what the documentary is really about and much as I feel like I wasted four hours being manipulated to watch something that was not what it said it was, that is nothing compared to the extra suffering that Lam’s family and friends may have to put up with as a result of this documentary.

So, in conclusion, don’t waste your time and don’t trust the Netlix algorithm that has made this the number one documentary on the platform. At least if it makes you think about the help we can give people who struggle there may be some redemption for the filmakers. Although I don't think that was what they had in mind at all.