The new Paul Mckenna Book and CD has hit the bookshelves of Amazon, WH Smith and everywhere else that you may expect. It's called Instant Influence and Charisma and interestingly it seems to use many of the techniques that Paul was trained in when he worked with Richard Bandler on NLP training which is something that he still runs workshops for.

NLP stand for Neuro Linguistic Programming and it aims to show you techniques that can help you to change the way you think and change the way that you feel. Often it can be associated with sales techniques and people being told ways that they can create empathy. In fact, I would think that the more you try and do something that isn't natural then the less likely you are to come across as sincere, hence the reason many salespeople come across as creepy and slimy!

So, the Daily Mirror has serialised part of the book and is explaining a couple of techniques so let's take a look... 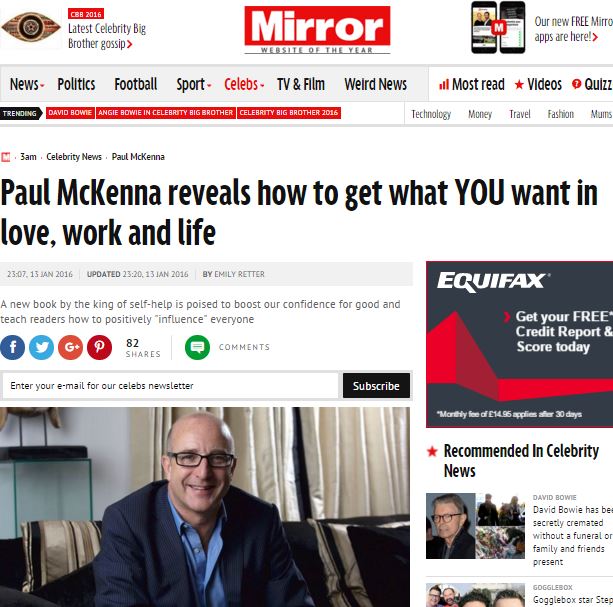 "You can make yourself more confident and assertive, lower cortisol (the stress hormone) and raise levels of testosterone (the confidence hormone), just by practising these three simple poses.

I’ve shared them with many friends and clients. Some of them go to the bathroom to do the poses before important meetings, and they notice that even walking from the bathroom to the meeting room people treat them differently.

Power pose one: Feet on desk, hands behind head

Power pose three: Punch the air with both arms"

These are already of interest to me because although standing in a way that makes you feel more confident is a great idea the first pose is one that may be familiar to you.

Have you ever had a boss who put his feet on the desk and his hand behind his head? I know I have had them in the past and all they make me think is that the person needs to get a grip and stop trying to look as if they are higher status than me. It's just disrespectful.

So, although I am often a fan of Paul Mckenna, because basically he takes all the good things that practising hypnotherapists like myself are doing, on this occasion he seems to have written a book for car salesmen.

It may not be what you are looking for but if you are then you can read more reviews on amazon below..