This article first appeared in the Wellbeing online and PDF magazine. As an example of a personal experience of how BWRT can help you with a phobia it makes a very interesting read... One of the great things about BWRT is that you can even have the therapy via Skype from the comfort of your own home.

Ending a lifelong phobia of spiders with BWRT 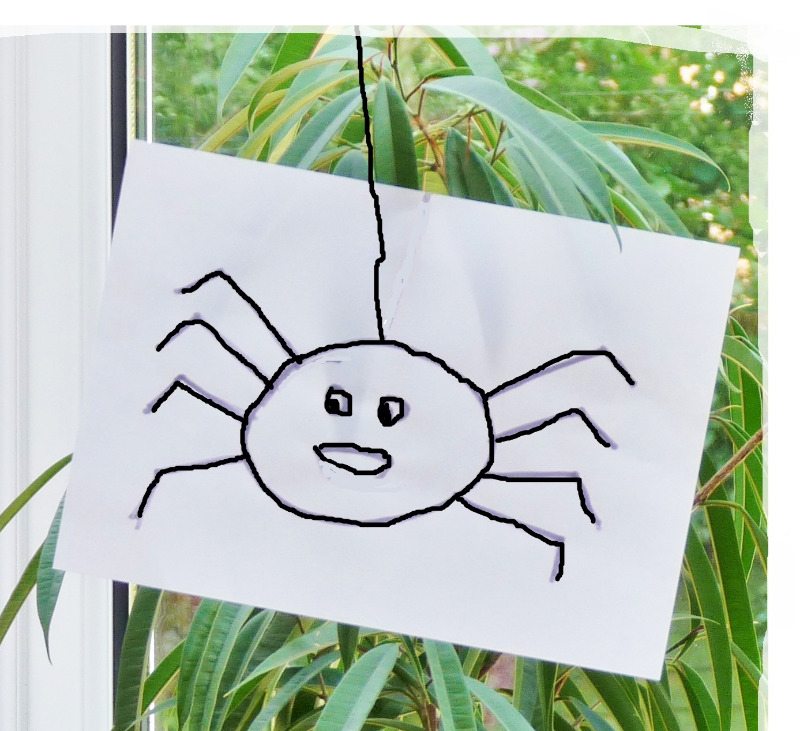 Many of us end the calendar year on a high; high with hopes for the coming New Year, with thoughts, promises, resolutions that we’ve set ourselves, in order to make ‘this year’ the year that our lives will change for the better and become all we’ve dreamed of! We now have to take action and make those changes we’ve been promising ourselves, rather than just dream.

This may be a good time to seek support from an outside source; a specialist in a particular field of expertise suited to our needs. Often we can’t quite pinpoint what it is exactly holding us back, and perhaps we need to review some old emotional responses and habits.

This is exactly what I did with my lifelong fear of spiders, deciding that now was the time to get rid of my phobia forever! There are many avenues we can choose to explore, to help us make the changes we desire. We might, however, be put off by the thought that if we seek help we’ll be tied into something lengthy and expensive. So you may be interested to learn a bit more about the relatively new, and exciting therapy I have experienced called Brain-Working. It’s both fast and effective!

BWRT - what is it? What does it mean?

BWRT stands for Brain Working Recursive Therapy; a modern therapy based on neuroscience that stops any uncomfortable or negative reaction to a situation in its tracks, before it has a chance to cause problems or upset. Even profound phobias, fears and anxieties can often be resolved with a qualified practitioner and one of the great things about it is that it’s not necessary for the client to discuss any personal details they would rather keep to themselves. All the therapist needs to know is what the client needs to change and the results are astonishingly fast and permanent. There are cases where an individual has had a problem for more than twenty years which has been completely ‘sorted’ in just a single session.

My Experience... What happens in a BWRT session?

I had had an informal chat with Bob about my fear of spiders; something that I’ve had for as long as I can remember. Bob mentioned BrainWorking, told me a bit of background information and of some of the issues it has been proven to help with to date. It sound-ed exciting, so I booked a session!

I chose to attend in person and, after making me welcome and comfortable, Bob began to explain in more depth the science behind the therapy, how it works and what to expect in our session. He explained about the plasticity of our brains, and how we can literally re-wire them. What he would be able to do, he explained, would be to ‘freeze’ a thought in the part of the mind that is pre-judgemental, and therefore the part that is ‘pre-emotional-response’. From this point, when this happened in the session, I would be able to change the thought to a preferred outcome, and thereby forge new neural pathways that would bear themselves out and respond to the new preferential experience as if it were so - and therefore as a result would be so. Please bear with me as I try and explain in my lay-woman’s terms!

Bob didn’t need to know the ins and outs of my thoughts and issues, just have an overall idea of what I would like to achieve. Brain Working therefore strikes me as a wonderful tool to deal with issues of a more personal and private nature. In my session I was led to imagine my preferred outcome. After this I was led to imagine the worst thought I could think of in relation to my issue (fear of spiders). I had several, I can tell you, though Bob asked me to focus on the one that presented itself as the very worst one, and give it a score of 0 - 10, with 10 being the most uncomfortable. As he led me to this memory (as it was a memory), and I had acknowledged where it was on the scale - a definite 10 (!) he was able to help me ‘freeze’ the image, step away from it, and look at it ‘from the outside’ in a dispassionate way. Far out - the sting was out of the tail! From this point Bob helped me bring in my preferred outcome, imagine it, and allow my brain to start rewiring itself.

I’m sure I’ve missed out lots of detail, though this is the main gist of what happened. Suffice to say that at the end of the session I felt very calm and couldn’t even remember the emotion previously felt in being afraid of spiders! During the imagining of my preferred outcome I saw myself as calm when seeing a spider, of any size, and being able to take it outside if found in the house. I had called the spider Sunshine and had said ‘now then Sunshine, just wait there and I’ll put you outside. There’s nothing to worry about, I won’t hurt you.’

The following morning, I got up; put my dressing gown on ready to make my way downstairs. I put my hands in my pockets, felt something in the right hand pocket, and pulled my hands out, wondering what it was. I experienced two concurrent streams of thought - one, wondering what it is in my pocket and, two, I thought ‘this is a spider’. Yet I didn’t freak and put my hands back into my pockets (not in a million years would I have done that before my Brain-Working session)! I pulled out my hands with the mystery object held gently on my fingers, then heard a plop on the floor, and looked down to see it move. Yes it was a spider. I had bare feet and my birthday suit on under my dressing gown, yet I still didn’t panic. Previously I would have legged it, grabbed someone to deal with it, and if no-one was around would have donned my ‘spider-fighting gear’ - wellie boots, rubber gloves and a vacuum cleaner! Cruel I know, though true.

However that morning I just watched calmly as Sunshine moved along the landing, moving from one safe place to another. I deemed that she is a she, as I thought she was quite pretty; a term I wouldn’t have chosen to use about a spider before! I didn’t feel that I wanted to pick her up - I think in case I squashed her, not sure? Though I was happy to go and get a glass and put her outside; so I asked Sunshine to stay put. I went downstairs, chatted to my partner, had a cup of tea, and calmly thought that I’d leave Sunshine to her own devices, knowing full well that I would be upstairs during that day to sort through boxes that have been in storage, that she may well crawl into and I might see her again later on (a thought that I wouldn’t have been able to consider before). I did meet Sunshine again, and she was put outside. I looked at her quite closely in the glass and, yes, she was pretty. Something else has just occurred to me as I type this - I used to even get creeped out when seeing the word ‘spider’, whereas now, it just seems a friendly word.

I am very impressed at the seeming simplicity of the Brain Working session and the speed of the new rewired response I now have. I also stand in awe of the synchronicity of the Universe in presenting me with the proof of the pudding - what were the chances of finding a spider in my dressing gown pocket the morning after my Brain Working session (after nearly 59 years of never even finding one in a shoe!)? Amazing!

You can read the original article here... BWRT in Wellbeing magazine 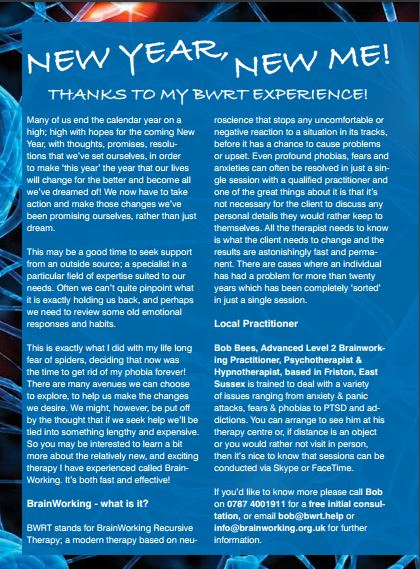 BWRT was developed in 2011 by Terence Watts, a UK therapist and teacher, and was inspired by the research of a scientist by the name of Benjamin Libet in 1983, and has been hailed by many as one of the fastest and most effective personal therapy methods ever to have been created.

In addition to the obvious advantages of low-cost, this means that a client has no need to make repeated visits to a therapist and can just get on with life that much sooner - and it’s even possible to work through some issues by Skype or telephone, making BWRT even more accessible. In fact, the proud boast of the Institute of BrainWorking Recursive Therapy is that BWRT is “The therapy of tomorrow today!”

You can call me on 07980 233160 or email me an [email protected] if you would like to book an appointment or ask any questions.