In one of the most shocking leaflet handouts seen for a long time the NHS in Poole, Dorset are advising new mothers to feed their babies, crisps, kit kats, milky ways and other junk food to solve feeding problems with no regard at all for the future of what will clearly be fat babies, fat children and then fat teenagers and adults.

Flyers handed to new parents by Poole Hospital NHS Foundation Trust recommended feeding chocolate, crisps, fried foods and sugary sweets to children over the age of eight months. The guidance is aimed to help children with ‘problems managing lumpy foods’. Rather than come up with a healthy fresh alternative for parents having problems they take the easy, lazy way out that can only lead to obesity and diabetes in later life.

It's an appalling and ill thought out idea. The foods on the list that they recommend include: Quavers, Skips and Wotsits, chocolate bars such as Kit Kats and Crunchies are also recommended ‘if a child sucks food well’. Because giving babies chocolate full of sugar is clearly a good idea to some within the NHS.

Of course this isn't all of the NHS just one trust who clearly have no idea how to help people be good parents. Take yourself off to another NHS website and you are given this much better advice..

‘Do not give them [babies] foods or drinks with added sugar, or salty or fatty food, as this will make them more likely to want them as they get older.’

That is clearly common sense and perhaps some people do need to be told that so why on earth are they handing out these leaflets in Poole?

The leaflets have been defended by Tracey Nutting, Poole Hospital’s director of nursing, who said that it was the ‘first of several documents given to a small number of parents with babies and toddlers who have significant feeding problems and are failing to progress onto solid food for a variety of medical or developmental reasons’.

It seems indefensible. A leaflet shouldn't be given to anyone with this advice. In fact if it is a small number of parents then there is even less reason to have a leaflet and even more reason to have a sensible conversation and some good healthy eating advice.

My only hope is that this story sheds light on those who are not looking out for you but just for a quick fix. Frankly Tracey Nutting should be ashamed and not trying to defend this story and leaflet. It's time she took a long hard look at this shocking idea and it was withdrawn alongside an apology and some good dietary advice. 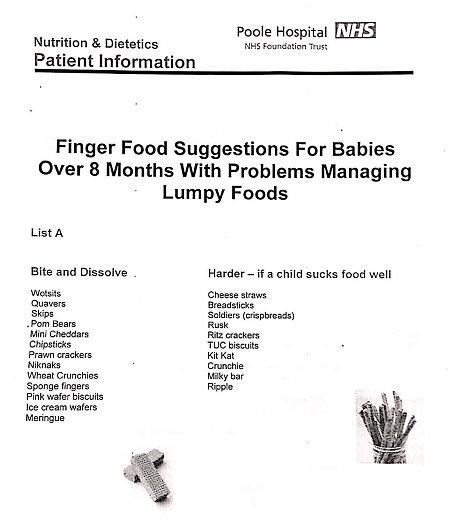