Naomi Campbell has a date with her hypnotherapist to help her kick her smoking habit in 2017. 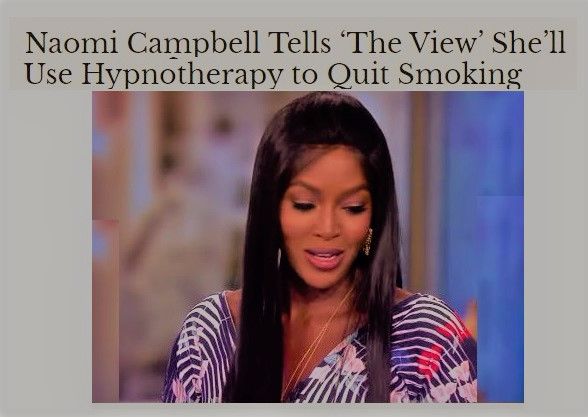 She may be best known for her reputation as a supermodel who throws things across the room but now that she is appearing in TV show Empire, the Actress seems to be mellowing.

Now she has revealed that she has been struggling to let go of her smoking habit, despite giving up drinking alcohol. She has tried Nicotine patches but says that this have simply not done the trick for her.

So Naomi has decided that she will turn to hypnotherapy to help her finally become a non smoker.

Speaking to host Whoopi Goldberg on U.S. talk show The View she explained..

"I still have a problem with smoking. I'm smoking less, but it's the hardest one. So I'm going back to the hypnotist."

She isn’t the first celebrity to have more than one visit. Singer Adele has famously had several attempts. The problem both of them have faced is that they have perhaps not really been ready to quit. Adele even explained that it wouldn’t work on her. Of course she is right, whilst hypnotherapy works really well in helping you to quit smoking, it wont make you do something you don’t want to do. Perhaps this time Naomi is really ready to get the right help.

Whoopi Goldberg told the story of a video that she watched which shocked her into becoming a non smoker herself.

"It was two kids I saw in a video, who have cystic fibrosis - children who can't breathe - and the last thing this little boy said in this video I saw, was, 'All I wanna do is breathe like a normal person.

He was nine at the time, and I thought, 'I spent 40 years smoking, and all this little boy wants to do is take a deep breath without fear.' That did it for me... So every time you go to smoke, realise that there's people who can't breathe properly."

Perhaps she could do with watching the video below which shows the difference between a smokers lungs and a healthy pair of lungs....

If you need help then you can read more about how Hypnotherapy can help you to become a non smoker right here: http://www.markpowlett.co.uk/quitsmoking.html