How Does EMDR work?

Can I do EMDR on myself?

If you read the Daily Mail you may have seen an article about EMDR which stands for Eye Movement Desensitization and Reprocessing.

It is a very powerful technique which has been around for a few years. It was created by Francine Shapiro, and is just one of the ways that I can help people who come to see me deal with traumatic incidents in their past that are still having an emotional effect.

Whilst seeing an article in a mainstream paper is always a bonus you may well start to read it and think “Can I do EMDR on myself? It just seems like waggling my fingers in front of my eyes!”

As ever the headline and the sensational way that the therapy is reported on really doesn’t do it justice.

Here’s how The Mail headlined the story...

How you can erase painful memories just by moving your eyes: An increasingly popular type of therapy can diminish negative memories and help your wellbeing
It might sound like a budget hypnosis session but this strange eye flicking ritual is an increasingly popular therapy called Eye Movement Desensitization and Reprocessing (EMDR) which is used for a number of serious conditions, including Post Traumatic Stress Disorder (PTSD), anxiety, depression and common stress.

Devotees say simply moving your eyes from left to right between 25 and 30 times can diminish negative memories and, therefore, their impact on your wellbeing.

Of course this is a very simplistic way of explaining what happens in an EMDR Session. In reality it is likely to be part of a longer period of therapy and certainly a great deal of fact gathering before someone start moving their fingers back and forth!

However, it is fair to say that they do go on to give quite a good explanation of how EMDR works.

So, How does EMDR process your memories for you?

'Memories are processed according to previous experience and assumption and then assimilated,' explains chartered clinical psychologist and former president of the EMDR Association in UK and Ireland, Dr Robin Logie. We learn from memory: hot items aren't picked up, certain foods avoided. These are all filed away and, on the whole, memories from long ago are vague. But if you have a bad experience, that negative memory is frozen in time. Your brain can't process it and the memory returns in dreams and flashbacks, often with a physical response such as feeling sick or actual pain. Rather than fading, it stays as vivid as the day on which it occurred. It hasn't been correctly processed.' 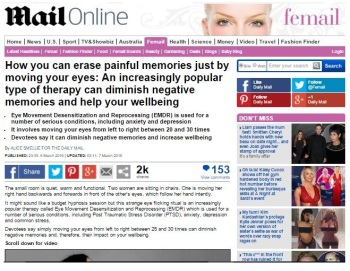 Brain scans have shown that when a traumatic event occurs, there is increased activity in the part of the brain which stores memories associated with sound, touch and smell, but not in the rational frontal lobes where reasoning occurs.

So trauma is stored in the brain as vivid images, sensations and sounds. Once lodged, this memory doesn't fade and exerts a disproportionate influence on subsequent behaviour.

This method of helping people deal with trauma was created by Francine Shapiro and is practiced by many people across the world. How it feels to many people can be described as detaching the feeling from the memory. So, you don’t forget that something had happened. It isn’t erased...like the Mail seem to think, it just doesn’t have the same emotive reaction any more.

If you would like to find out more about how EMDR could help you then do feel free to call me on 07890 233160 or drop me an email via this link EMAIL ME HERE. If you are looking for someone local to you who could help you, my advice would be to check what other training and qualifications they have alongside EMDR so that they have the widest available methods to really help you to get what you want.