The Daily Mail started the year by doing a serialisation of Paul Mckenna's new book The Three Things That Will Change Your Destiny Today but now they have a new story where they pitch doctors who perform gastric bands against the hypnotist and his new gastric hypnosis app. 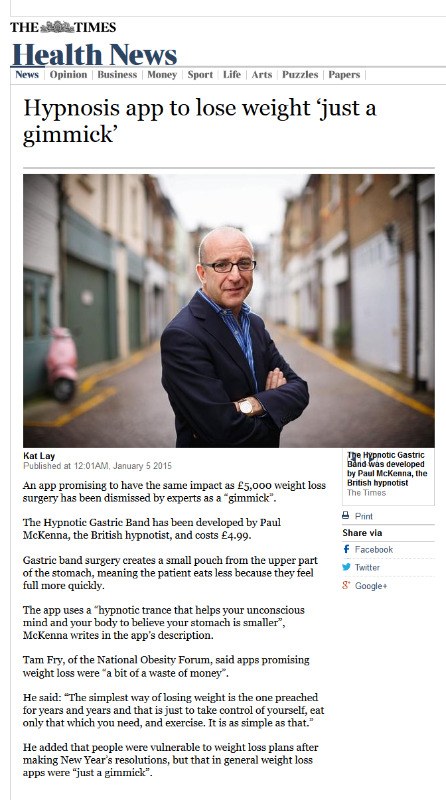 The Times has already reported on the story that the gastric band hypnosis app is just a gimmick.

They report that many surgeons who perform the actual gastric bypass operation are saying that the Mckenna app cannot have the same effect and will not work in the long term. The surgery can cost up to £6000 and of course comes with all of the risks that any surgery can carry. The app is £4.99 and is more of a chance to make yourself aware of the changes that you can make for your life.

Dr Carel le Roux, a lead physician at London’s Imperial College Healthcare’s obesity service, is reported to have said that he thinks the app is ‘a gimmick’. and "isn’t powerful enough to be effective in the long term.’

It won't work in the long term

Consultant surgeon Paul Super, from the BMI Priory Hospital in Birmingham, agrees. He says: ‘It might be called a hypnotic gastric band, but is no more a physical operation than a hypnotic pacemaker or hypnotic hip replacement. If it worked, then why aren’t thousands of patients having it on the NHS?’

These are interesting points of view but they do seem to miss the point entirely. The fact is that there are many thousands of clinical trials which show how effective hypnotherapy is over a huge range of issues, from letting go of anxiety and stress, to learning to turn down pain.

The same people who are getting an operation should of course be getting access to talking therapies as well in order to make sure that they have all of the support that they need.

I think that a gastric band hypnosis app is really only likely to be a short term fix, as it does not address the other emotional issues around eating, but of course that is exactly the same as with a physical operation.

When I work with weight loss clients I have a full programme which deals with all of the issues rather than a quick fix. My experience has taught me that many people want to end a lifetime of diets and binge eating in one session and this is just not a realistic way to go about it.

If you do want to end diets then you can read more on this website about my No More Diets programme.

As for the app then...only time will tell.