Did Paul McKenna use Hypnosis on people to vote to leave the European Union?

Whilst the whole of the United Kingdom is coming to terms with the shock result of the referendum on whether to stay in the European Union after the vote to leave campaign won many questions are being asked about what happened. The fallout from the result could well last for years and mean huge change for the economies of not just the UK, but Europe and worldwide.

It's been widely reported that much of the information presented wasn't factual but played on people's emotions, and that seems to be the way that politics is moving. You only need to witness the rise of Donald Trump in the USA, a man with no political experience, but a way to talk to people that seems to resonate, to see the changes. 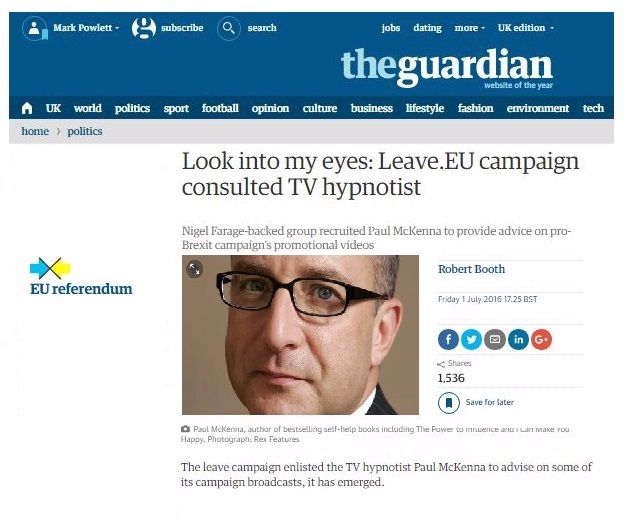 Now news emerges that Hypnotist Paul McKenna was recruited by the Vote Leave campaign to help them make sure they were using the right language. Donald Trump has already been spoken of in these terms by the creator of the cartoon Dilbert who thinks that his language is very suited to his cause.

The Guardian has reported that Paul McKenna was brought in by Ukip-backed Leave.EU campaign to examine early edits of promotional videos. as a friend of Arron Banks, the Bristol-based multimillionaire insurance businessman who bankrolled the Leave.EU campaign with a £5.6m donation.

“understands the psychology of the mind” and helped Leave.EU “produce social media ads that resonated with people”.

Of course, given the emotive issues around what might be seen as mind control they were very eager to point out..

“We didn’t hypnotise anyone.”

When contacted by the paper and asked about his involvement, Paul McKenna who is perhaps now known more for his self help books and CDs as well as spending time with his showbiz friends such as Simon Cowell said.

“He is friendly with Arron Banks and Banks showed him a few rough cuts of promotional videos they were considering using in their campaign. He was quite intrigued by the new style of political campaigning, which he thought was influenced heavily by American politics.”

What is really happening here though? Is it Mind Control of the Masses?

You may wonder what his involvement was and of course it isn’t a case of using his hypnosis skills, but rather a chance for him to talk about the use of language. Perhaps the most striking thing when you take a step back is the simple use of the phrase “Vote Leave”. Every time that we say or read it again, you could well think to yourself that it is some sort of command. You may chose to accept it, or it could repel you. However, perhaps there are people who were unsure who may have taken it on board more that the phrase used by the remain camp. Actually, what was that again? I’m not sure I remember, so perhaps it wasn’t as strong as it could be.

There is no doubt in my mind that as time goes on this examination of the use of language will grow. Politics seems to be moving closer and closer to a use of feelings and emotions and further and further away from facts.

I don’t think anyone is using hypnosis to make us do something that we don’t want to do, because that just isn’t how it works, but perhaps subtle cues could be influencing us all more than we realise.

Just look at the headlines from the video that Paul McKenna is said to have worked on:

“Are you concerned about the amount of crime being committed in the UK by foreign criminals?”

“Are you worried about the overcrowding of the UK and the burden on the NHS?”

“Isn’t it time to take back control?”

Just look at the wording and take a moment to think about what they appeal to and who they are appealing to. They set up questions that many people may answer yes to, and once that pattern is set the next question also gets a yes answer to it.

A big part of hypnosis is repetition and no one can deny that we didn’t hear the phrases like “Take back control” repeated on and on. If you are doing something positive then of course it helps to think about that in a positive way, and so it works the same if you are trying to put a negative in people's minds.

As we navigate this sea of turmoil now, we can only hope that we all move forward with facts and a clear head.