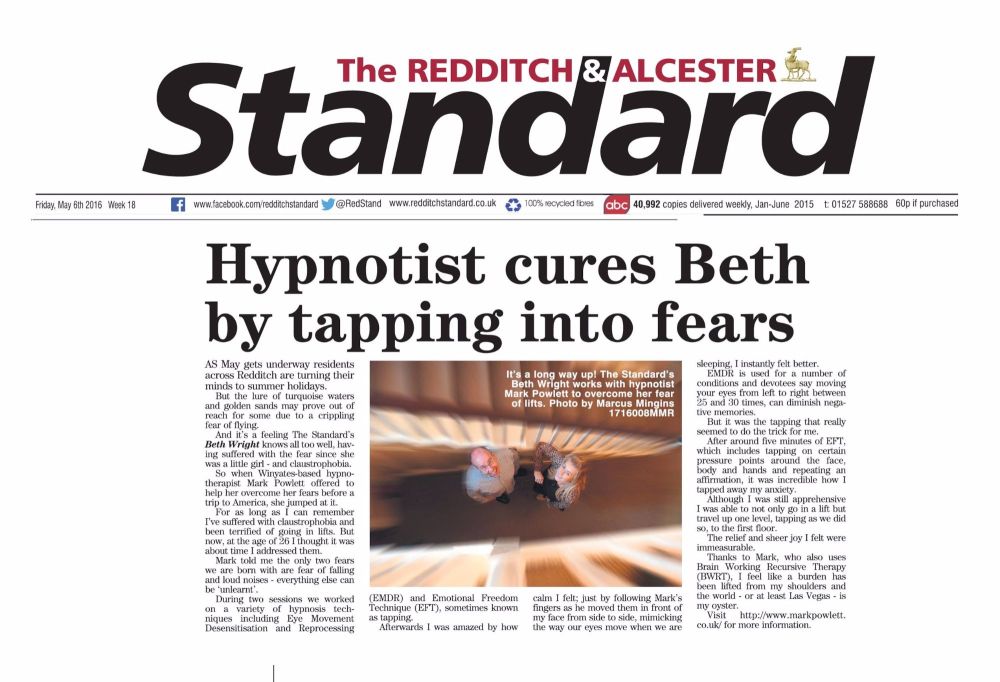 I always love a challenge so when I was asked by reporter Beth Wright from the Redditch Standard if I could help her with a problem then I was more than happy to help.

I had already met Beth last year when we spoke about phobias of snakes after a report in the paper about a snake who had hidden in a car engine prompted a rash of calls to me from people with similar phobias.

This time the challenge for me was to help Beth as she prepared for a holiday in Las Vegas. However, rather than looking forward to this trip Beth was very worried about how she would deal with not just the flight, which of course is one of the most common fears that I help people with, but also with a fear of getting in a lift.

Knowing that we didn’t have much time before the trip, and also that we could use the lifts in the Redditch Library, which is just across the square from the offices of the Redditch Standard, I knew that we had somewhere that we could go to actually see how well what we were doing was working.

Here’s the story as reported in the Redditch Standard by Beth Wright herself... 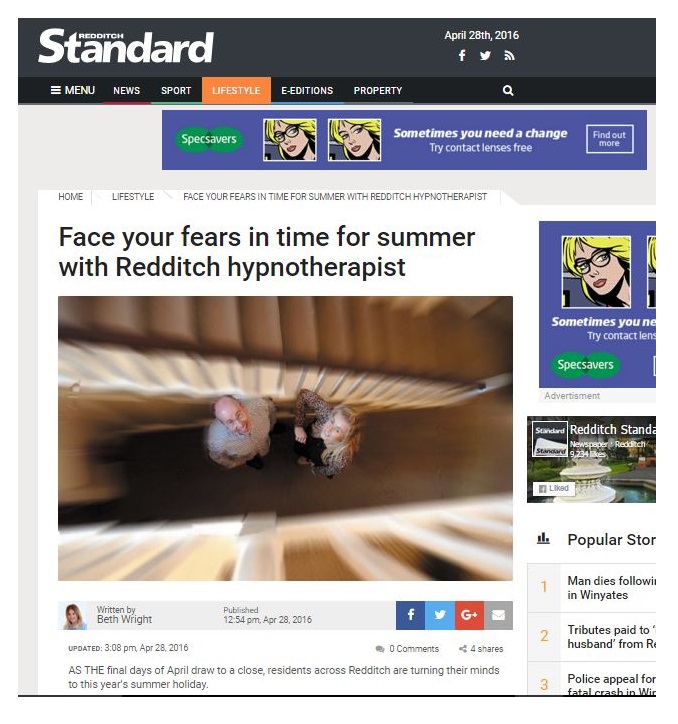 AS THE final days of April draw to a close, residents across Redditch are turning their minds to this year’s summer holiday.

But the lure of turquoise waters and golden sands may prove out of reach for some due to a crippling fear of flying, which haunts many us across the borough.

A number of factors can be blamed, including claustrophobia, a fear of heights and a general lack of control.

It’s a feeling The Standard’s Beth Wright knows all too well, having suffered with a fear of flying since she was a little girl along with all-consuming claustrophobia, which is so restrictive she hasn’t used a lift in six years.

So when local hypnotherapist Mark Powlett, who works out of his surgery in Winyates, offered to help Beth overcome her fears before a trip across the pond to America, she jumped at the chance.

For as long as I can remember I’ve suffered with claustrophobia and been terrified of going in lifts. But now, at the grand old age of 26 I thought it was about time I addressed my fears.

They were starting to curb my excitement over my trip to the States next week as I have a 10 hour flight and countless ‘elevators’ to face upon landing in Las Vegas.

But Mark helped me learn the only two fears we are born with are falling and a fear of loud noises – everything else we find ourselves scared of can be ‘unlearnt’.

During two sessions with Mark, who could not have made me feel more comfortable or at ease, we worked on a variety of hypnosis techniques including Eye Movement Desensitisation and Reprocessing (EMDR) and Emotional Freedom Technique (EFT), sometimes known as tapping.

At the start of my first session I described my fears on a scale of one to ten, as right up there at the top spot.

But after working through both techniques I was amazed by how much calmer I felt and actually didn’t feel too fazed at the prospect of getting into a lift or the thought of the being on an aeroplane.

Prior to the session just the thought of doing both made me short of breath, panicked and on edge.

But just by following Mark’s fingers as he moved them in front of my face from side to side, mimicking the way our eyes move when we are sleeping, I instantly felt better.

EMDR is used for a number of serious conditions, including Post Traumatic Stress Disorder (PTSD), anxiety, depression and common stress and ‘devotees’ say moving your eyes from left to right between 25 and 30 times, can diminish negative memories.

But it was the tapping that really seemed to do the trick when it came to the final hurdle – going in a lift in Redditch Library and travelling up to the first floor.

It was a target I set myself going into the sessions and one I was hesitant I would even be able to achieve.

But Mark was by my side every step of the way, and while he assured me I did not have to face it unless I was comfortable, his steady presence was extremely reassuring.

After around five minutes of EFT, which includes tapping on certain pressure points around the face, body and hands and repeating an affirmation, it was incredible how I tapped away my stress and anxiety.

Although I was still apprehensive I was able to not only go in the lift but travel up one level, tapping as we did so, to the first floor – something I haven’t been able to do for six years.

The relief and sheer joy I felt at being able to cope was immeasurable, no longer will I have to traipse up flights of stairs, luggage in hand, hanging off the handrail as I fight for breath!

I can’t begin to explain just how much two simple sessions with Mark, who also uses Brain Working Recursive Therapy (BWRT), helped me face up to my fears.

Thanks to Mark I feel like a burden has been lifted from shoulders and the world – or at least Las Vegas – is my oyster.