Danny Boyle's latest film is the thriller Trance. Made whilst he was working on the wonderful Olympic opening ceremony, it stars James McAvoy and Rosario Dawson and is a high octane thriller about an art theft.

Dawson plays a hypnotherapist in the movie and so she was taught all about what we hypnotherapists do to help prepare her for the part. 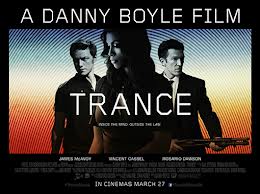 However, she nearly ended up causing a car accident when she started to put some of her new skills into practice, and accidentally hypnotised her friend.

She recently gave an interview for French Television where she said:

''I hypnotised one of my friends, but it was by accident! It was interesting, I recorded one of the trances that you hear in the film's trailer, and we were driving through the French countryside and everything felt very remote and far away and I started to say the very soft, relaxing words and doing this trance. My friend was actually the one driving on the motorway and she nearly crashed because she started to doze off. It worked! I was very pleased!''

Of course trance is a naturally occurring state that we can drift in and out of many times a day so just by talking softly and helping to relax her friend whilst driving it would have been easy for her to drop off!

It does show that taking some time to relax is perhaps easier than you would think once you have started to try it.

The one caveat I would say is not to do it whilst driving or operating heavy machinery !  Just find somewhere nice and quiet and take some time for yourself. You can even listen to my FREE relaxation MP3 whilst you do it !