Pokemon Go seems to be everywhere at the moment. As I walk the dog in the park I see gangs of childen and adults roaming around and trying to catch Pokemon every time.

Some people say that it's a terrible thing, but from what I see there is so much more interaction and exercise going on than there was before.

Now a Heartwarming story has appeared on social media after a Facebook user posted a story about his Autistic Child and how he has stepped out of his comfort zone and found a real happiness.

It's a heartwarming read and you can see the post for yourself here: 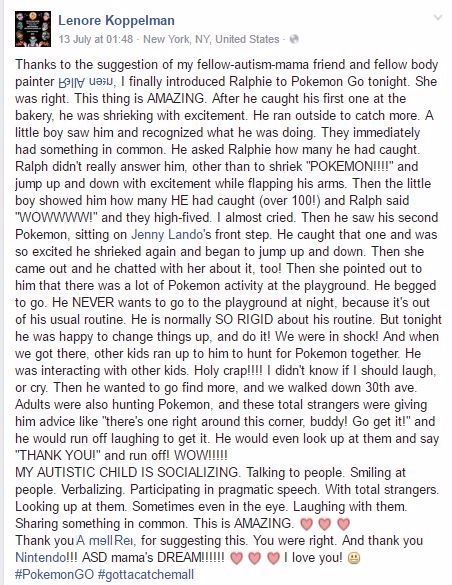 So, if you think that children getting outside and looking for imaginary creatures on their phones is a bad idea...it may be time to see it from that other point of view.

If you can't see the text in the picture here it is in full for you to read..

Thanks to the suggestion of my fellow-autism-mama friend and fellow body painter, I finally introduced Ralphie to Pokemon Go tonight. She was right. This thing is AMAZING. After he caught his first one at the bakery, he was shrieking with excitement. He ran outside to catch more. A little boy saw him and recognized what he was doing. They immediately had something in common. He asked Ralphie how many he had caught. Ralph didn't really answer him, other than to shriek "POKEMON!!!!" and jump up and down with excitement while flapping his arms. Then the little boy showed him how many HE had caught (over 100!) and Ralph said "WOWWWW!" and they high-fived. I almost cried. Then he saw his second Pokemon, sitting on Jenny Lando's front step. He caught that one and was so excited he shrieked again and began to jump up and down. Then she came out and he chatted with her about it, too! Then she pointed out to him that there was a lot of Pokemon activity at the playground. He begged to go. He NEVER wants to go to the playground at night, because it's out of his usual routine. He is normally SO RIGID about his routine. But tonight he was happy to change things up, and do it! We were in shock! And when we got there, other kids ran up to him to hunt for Pokemon together. He was interacting with other kids. Holy crap!!!! I didn't know if I should laugh, or cry. Then he wanted to go find more, and we walked down 30th ave. Adults were also hunting Pokemon, and these total strangers were giving him advice like "there's one right around this corner, buddy! Go get it!" and he would run off laughing to get it. He would even look up at them and say "THANK YOU!" and run off! WOW!!!!!
MY AUTISTIC CHILD IS SOCIALIZING. Talking to people. Smiling at people. Verbalizing. Participating in pragmatic speech. With total strangers. Looking up at them. Sometimes even in the eye. Laughing with them. Sharing something in common. This is AMAZING. <3 <3 <3
Thank you, for suggesting this. You were right. And thank youNintendo!!! ASD mama's DREAM!!!!!! <3 <3 <3 I love you! :D‪#‎PokemonGO‬ ‪#‎gottacatchemall‬