In the UK if you talk about celebrity hypnotherapists then the first name that comes to mind is probably Paul McKenna, but in the USA there is another name. The Daily Mail has reported the story of the Hypnotist to the stars and you won’t believe how much she charges Hollywood celebrities for hypnosis sessions! 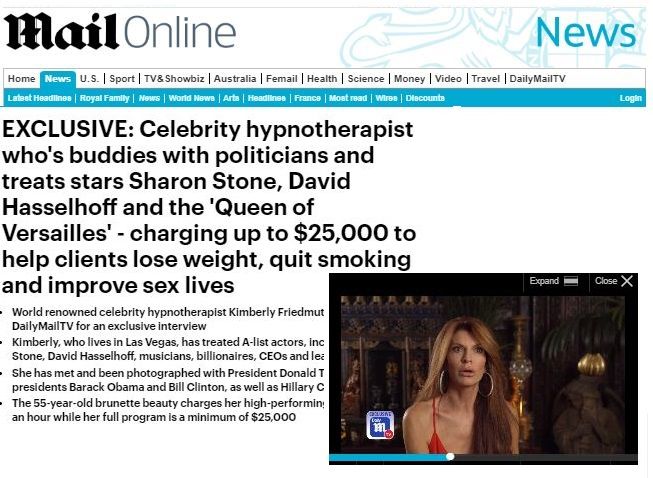 According to the Mail she works with stars like Sharon Stone and Knight rider David Hasselhoff and charges up to $25,000 to help them lose weight, quit smoking and even improve their sex lives. Most people are probably seeing her for stress and anxiety by the sounds of the interview but that isn't quite such a salacious headline of course!

Kimberly is based in Las Vegas, has worked with A-list actors, including Sharon Stone, David Hasselhoff, musicians, billionaires, CEOs and leading politicians

What are Kimberley Friedmutter’s fees? Well she charges her high-performing clientele $1,000 an hour while her full program is a minimum of $25,000

She wasn’t always a hypnotist though she started out as an Original Victoria's Secret model and she now lives in a  $5 million mansion just outside Las Vegas.

Although she signs NDAs with most - those who have been vocal about her include Sharon Stone, David Hasselhoff and socialite Jacqueline Siegel, also known as The Queen of Versailles.

'I'm known as the hypnotist to the stars, because yes Hollywood does have problems and when they have problems they come to me,' Kimberly explained to the Mail.

But with other big name celebrity supporters including the likes of Jennifer Hudson, Martha Stewart, Mike Tyson, Quincy Jones and George Lopez, her services are in high demand.

'Really the biggest issues are a fear of flying, that's a big one, especially after 9/11 my practice really increased with that as an issue. Eating disorders are another very big issue for my practice, weight loss, apathy to action, getting to the gym. Another really interesting issue is when a client will be appearing nude on screen or partially clothed or against someone as a co-star who is very beautiful or fit. I guess it's FOMO (fear of missing out), they don't want to miss out on being in the perfect shape for the film. So it's a form of body dysmorphia. It's a very serious thing because you have to change the client's perception of their own body when they look in the mirror.'

Kimberly also explains that she often gets more input from a client's spouse than the client themselves.

'If they've come for one thing there might be 10 things we're working on by the time they leave.'

Kimberly says one actor came to her and asked if they could be hypnotized so they didn't fall in love on set.

'You often hear of the co-star falls in love with the co-star and that can create a lot of problems for some people,' she says.

Kimberly runs her private practice from her impressive $5 million home about 20 minutes away from the Las Vegas Strip.

Kimberly claims that some of her more high profile clients bring their personal physicians along to sit in on her sessions.

'I've even had politician's aides sit in so that they won't divulge anything. Those are the types of things I contend with,' she says.

'These people are super super smart, they are already enlightened but they're coming to me for that fine tuning and that final touch.'

She stops short of revealing who has sat down in her hypnosis chair, however.

Should Kimberly's wealthy clients need her by their side on their travels the hypnotherapist jumps on a private jet to join them anywhere in the world.

She says it helps that she understands the demands her high profile clients face.

She also explains that her skill is a 'lot less hocus pocus' and more science and art.

Kimberly also says she's not a stage show hypnotist so can't snap her fingers to make an instant change in someone's life.

'Hypnosis is a lot like meditation, people don't really understand what it is, but it's simply moving the consciousness away from the subconscious, so that the subconscious can participate in the conversation,' Kimberly explains.

'So for example if your phone is ringing or you're running after your children or whatever the case is, you're very conscious, but when all that is set aside and you're relaxed and everything is calm and cool in your world, then all of a sudden you can listen, there's a quietude about you.

Being a Hypnotherapist who works in the UK and more often than not with people who are not celebrity clients it is very interesting to read about how things can work across the pond. If you don’t have $25000 then you may not be surprised to hear that you can get help for your problems from many qualified people here in the UK without having to break the bank.

You can read all about me and how I work here: Mark Powlett Hypnotherapy